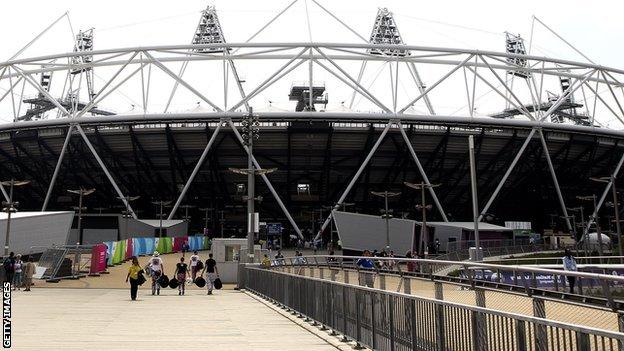 A major parliamentary report into the London 2012 Olympics warns that the prospect of an "effective and robust" legacy from the Games is in jeopardy unless there is a change in government approach.

The House of Lords Select Committee on Olympic and Paralympic Legacy says the Games were an "outstanding success", but urges the government to appoint a minister with overall responsibility for producing legacy benefits which, it warns, "are in danger of faltering".

The report finds "little evidence" of increased participation in sport, highlights the uneven distribution of economic benefits of the Games across the UK, and also criticises funding body UK Sport for its 'no compromise' policy on sports without short-term medal prospects.

"It is clear to everyone that the Olympic and Paralympic Games were an outstanding success," said the committee chairman, Lord Harris of Haringey.

"However, since the Games, the same political impetus and agreed deadlines no longer exist and many aspects of legacy are in danger of faltering, whilst some have fallen by the wayside.

"There is confusion on the timeframes and targets involved in delivery and a lack of clear ownership of legacy as a whole."

The committee, which took evidence from Mayor of London Boris Johnson, former Olympics Minister Tessa Jowell, and former Games organising committee chairman Lord Coe among others, recommended that a minister be given responsibility for the Olympic legacy, enabling greater co-ordination across Whitehall departments.

It also believes the Mayor of London should be given control over further development of east London and the Olympic Park in Stratford.

And there is a stark warning over the geographic disparity across the UK in the economic benefits stemming from the Games.

Government figures state that £2.5bn of additional foreign direct investment had been secured since the Games, resulting in 31,000 new jobs.

But while London and the south-east of England benefited with nearly 15,000 additional jobs, just seven were created in the North East.

London 2012 may have promised to "inspire a generation" but the committee of cross-party peers says it found "little evidence [of a] step change" in sports participation levels across the UK.

"Whilst some sports have performed well, many others were unprepared for capturing the enthusiasm of the Games," added Lord Harris.

"We call on the government urgently to develop action plans to ensure the forthcoming decade of major sports events can be leveraged to create the step change."

The committee also called on the Department for Education to give greater emphasis to PE in schools and to ensure teachers had the necessary training.

UK Sport, the body that invests approximately £100m in high-performance athletes and teams each year and decides funding levels for Olympic and Paralympic sports, is also criticised in the report.

Following London 2012, 18 sports were given increases in funding.

Five, including swimming, had their budgets cut - with volleyball suffering an 88% reduction in its allocation after all four Team GB teams were eliminated in the Olympic group stages last year.

But the committee believes not enough is being done by UK Sport to help both team and emerging sports.

"The 'no compromise' approach of UK Sport has delivered medals for Team GB and has clearly improved top-end importance," said Lord Harris.

"This approach, however, has an inherent bias against team sports, and fails to help emerging sports, some of which, such as handball and volleyball, generated real enthusiasm at London 2012.

"It is not a one-size-fits-all approach for all sports, and we make the case for a different approach to be applied to developing sports that have less prospect of short-term medal success."

UK Sport said it would be working on a full response to the report with the Department for Culture, Media and Sport.

"UK Sport's 'No Compromise' approach is about getting the right support to the right athletes for the right reasons over an eight-year investment cycle," a statement from the funding body said.

"It has created a high-performance system that is admired the world over and to abandon it now would enable other nations, who want to replicate GB's Olympic and Paralympic success, to seize upon the opportunity."