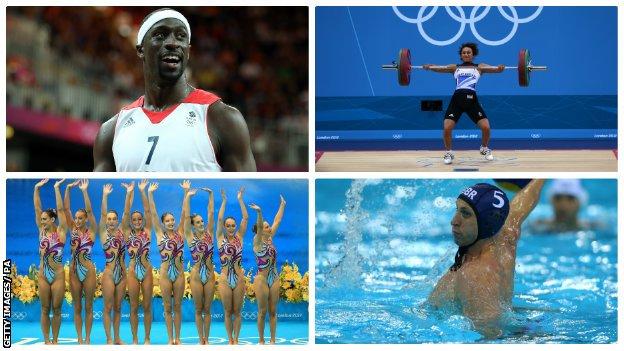 Basketball, synchronised swimming, water polo and weightlifting have all had their Olympic funding withdrawn.

UK Sport has decided to put money into other sports ahead of the Rio Games in 2016 and Tokyo 2020.

UK Sport chief executive Liz Nicholls said it would be "high risk" to continue funding sports with little chance of winning a medal by 2020.

Around £350m will be spent preparing Britain's best medal chances at both the Olympics and Paralympics. The sports that have missed out have until March to lodge an appeal.

British Basketball reacted to the news with "disappointment" and claimed the UK Sport funding system "appears to show bias against team and emerging sport".

The sport was in a similar position a year ago, but managed to win funding for a further year on appeal. Now that money has gone completely.

"The basketball community at home and abroad will be aghast that this can happen again," said Roger Moreland, British Basketball's performance chairman.

"We are still on the road to Rio but we now have to qualify for EuroBasket 2015 with our hands tied behind our back."

Drew Sullivan, captain of British men's team, hit out at the news on Twitter, accusing the decision-makers of "not having a clue".

He told BBC Radio 5 live: "I'm desperately disappointed, not only as a player or fan of basketball but also as a parent.

"I have three kids and two of them are hugely interested in basketball and when they see me pull on a GB uniform, they say: 'Dad, I want to play for my country as well.'

"What hope do they have to achieve their dreams if it doesn't seem to be seen as very important to UK Sport?"

British Swimming was equally upset with the decision to cut funding to synchronised swimming and water polo.

Chief executive David Sparkes called it "an extremely dark day for women's sport in this country" and said the announcement "could well signal the death of these historic Olympic sports in Britain".

He added: "We will now carefully look at our options and may well consider a more formal appeal over these devastating decisions."

British Weightlifting chief executive Ashley Metcalfe said: "Although initially disappointing, it cannot have been an easy decision for UK Sport", adding he was "delighted" their Paralympic powerlifting funding remained unchanged.

UK Sport said funds had been increased to 18 Olympic and Paralympic sports following the "most rigorous annual investment review process".

Several sports have had a funding increase, including triathlon, whose pot of money goes up from £5.5m to £7.5m, a 35% increase.

Three Olympic sports that had their funding cut a year ago - handball, table tennis and wrestling - did not receive funding.