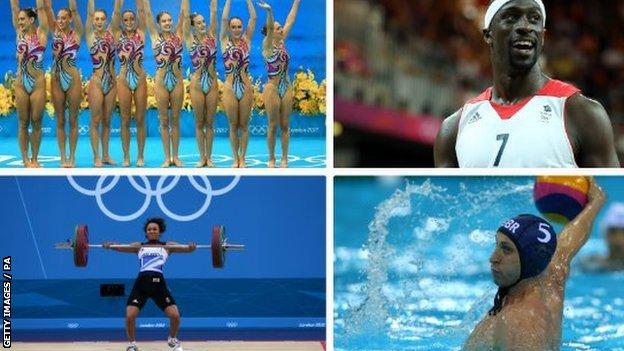 Weightlifting has won back its UK Sport funding, but six other sports have failed in their appeals.

Basketball, synchronised swimming and water polo continue to lose out, as do Paralympic sports wheelchair fencing, goalball and five-a-side football.

UK Sport is focusing on sports that can "credibly demonstrate medal-winning potential within eight years".

"Weightlifting came back to us with a compelling new strategy focussed on developing their most talented female athletes with a view to challenging for medals by Tokyo 2020," said Rod Carr, chair of UK Sport.

Ashley Metcalfe, chief executive of British Weightlifting, told BBC Radio 5 live: "We had a chance really to re-focus and re-assess where we were going with the sport after the disappointment of three to four weeks ago.

"What we soon realised what actually we had an outstanding group of young female lifters that had every chance to be successful both at Rio, Tokyo and beyond.

"We presented on that case. That actually our female lifters could reach the milestones that UK Sport were wanting to set."

Around £350m is to be spent preparing Britain's best medal chances at both the Olympics and Paralympics.

After UK Sport announced its funding in February, chief executive Liz Nicholl said that it would be "high risk" to continue funding sports with little chance of winning a medal by 2020.

"If the nation values sporting success, we can deliver it but only if we remain focused as the Olympic and Paralympic environment is becoming increasingly competitive," Nicholls said after Wednesday's decision.

"These are tough calls to make and we know that it is even tougher for the sports and athletes directly affected by funding withdrawal."

He added: "How can an elite programme such as synchro, which has long been held by UK Sport as a model of world-class athlete development and leadership, that has achieved all of its performance indicators since it first received funding, have its funding removed just 12 months after it was enhanced?

"It is a sport that has never failed to deliver on its performance promises and this decision beggars belief. It clearly highlights a fundamental flaw in the UK Sport funding system."

"If there is the political will and the leadership, a solution can be found," he said. "Other countries have done so."

"It will be extremely difficult to continue to progress the talented athletes and further develop the performance programme without any other sources of funding," read a statement.

Mike Reilly, the chief executive of Goalball UK, said the decision would have a "profound and long-term detrimental impact" on his sport.