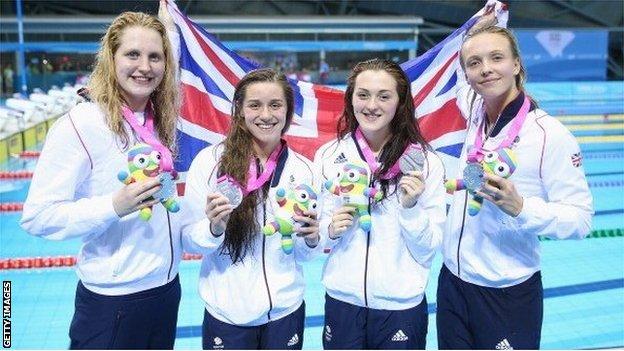 Swimmer Charlotte Atkinson has spoken of her pride after winning a silver medal at the Youth Olympics in Nanjing with the GB 4x100m medley relay team.

The British quartet finished 2.17 seconds behind on gold medallists China on Monday, with Australia third.

"I am absolutely delighted, I could not ask for a better group of girls," said the 17-year-old from the Isle of Man.

The team of Atkinson, Amelia Maughan, Jessica Fullalove and Georgina Evans finished in a time of 4 mins 5.75 secs.

Swimming is the best represented discipline for GB in Nanjing - with Atkinson one of eight athletes.

and she added: "It is fantastic to compete against the best young athletes from all over the world."

The Manx teenager did not reach the semi-finals of the 50m butterfly, but will compete in her favoured 100m event on Thursday.

Isle of Man swimming manager Leeonie Cooil said: "We are so proud of her. She was brilliant representing the Isle of Man (at the Commonwealth Games) in Glasgow and now she is doing it for GB."

More than 3,500 athletes from 204 countries are taking part in the Youth Olympics, which run until 28 August.