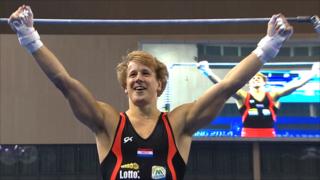 Epke Zonderland of the Netherlands wins gold in the men's high bar final at the World Gymnastics Championships in Nanning, China.

On a mixed final day for GB, Claudia Fragapane finished eighth in the floor final after falling in her opening tumble.