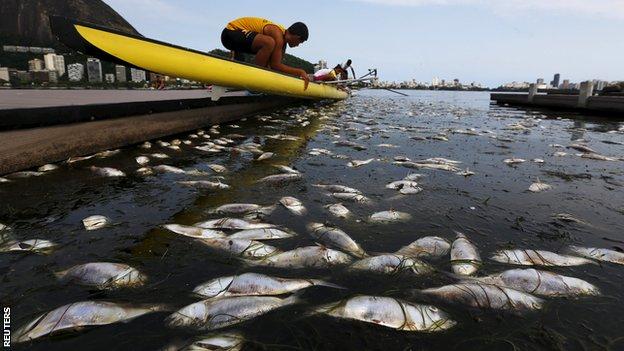 Thirty-two tonnes of dead fish have been cleared out of the lagoon where Olympic rowing and canoeing events will take place at Rio 2016.

More than 60 people from the Brazilian city's sanitation department have been removing the fish from the Lagoa Rodrigo de Freitas over the past week.

Some experts believe pollution is to blame, while others claim it is down to a sudden drop in water temperature.

The Games begin in Rio de Janeiro on 5 August next year.

Tonnes of dead fish have been washed up at the Lagoa Rodrigo de Freitas at regular intervals for more than a decade.

In February, thousands of dead fish were discovered in Guanabara Bay, which will host the sailing events.

The venue has previously caused concern because of the levels of refuse and untreated sewage in the water.

In January, Brazilian government officials admitted they would miss their target of an 80% reduction in water pollution by the start of the Olympics.