Usain Bolt ended his Olympic career by claiming an unprecedented 'triple triple' and his ninth gold as Jamaica won the 4x100m relay final in Rio.

He combined with Asafa Powell, Yohan Blake and Nickel Ashmeade to lift gold in a time of 37.27 seconds.

Japan won a surprise silver and the USA were disqualified to hand Canada bronze and lift Britain up to fifth.

He intends to retire after the 2017 World Championships in London and will not compete at Tokyo 2020, at which point he will be nearly 34.

Bolt's haul of nine golds is the joint highest among Olympic athletics.

"I'm going to stay up late and have fun," Bolt told BBC Sport.

"I never knew this would happen when I started out. My team came through for me tonight. As long as we got the baton round, it was never in doubt.

"It's a brilliant feeling. Iit's been a long road. I'm happy, but I'm relieved. It's great to be in the history books as one of the greatest. I'm proud of myself."

Blake made an attempt to persuade 100m and 200m world-record holder Bolt to continue for another four years, saying: "Usain needs to be immortal and he is immortal. I will encourage him to come back for 2020." 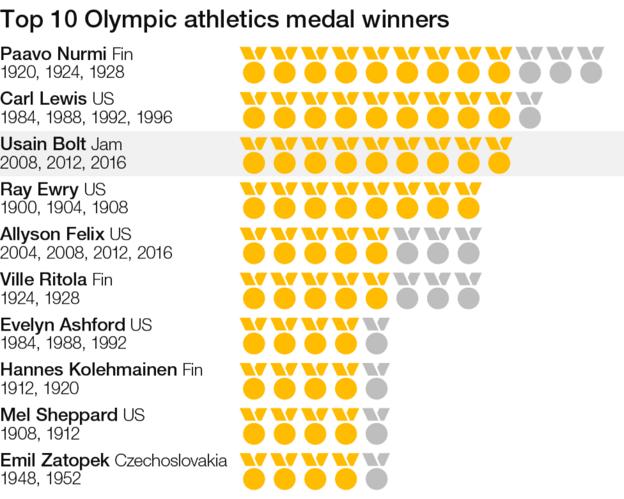 Why were USA disqualified?

The American team of Mike Rodgers, Justin Gatlin, Tyson Gay and Trayvon Bromell celebrated winning a bronze before they were disqualified.

Gatlin, who won 100m silver, was ruled to have received the baton too early from Rodgers during the first handover.

"We already did the victory lap and then, when we talked to TV, they told us," said Gay. "They said Justin got the stick before the zone. He's saying he didn't."

The GB quartet of Richard Kilty, Harry Aikines-Aryeetey, James Ellington and Adam Gemili finished sixth but were promoted to fifth.

"We are disappointed not to win a medal," said Gemili, who narrowly missed out on 200m bronze. "We know we are capable of it."

Four-time Olympic gold medallist Michael Johnson: "This was an incredible race. USA were in it. Japan were in it. Jamaica just had to get it round to Usain Bolt. He had to chase the Japanese team, but Bolt... flawless. All gold. No silvers. No bronze. A fantastic performance at these championships."

Two-time 110m hurdles world champion Colin Jackson: "Usain Bolt is just too good. Once he got in his stride, nobody was going to catch him. An incredible man, a wonderful athlete and we are all incredibly pleased he has done what he has done."

Former Olympic silver medallist and BBC Sport commentator Steve Cram: "Usain Bolt, the greatest ever. We are all privileged to have been here throughout his career and watched his Olympic performances. They should proclaim him the eighth wonder of the world."