The World Anti-Doping Agency (Wada) had recommended a blanket ban for all Russian athletes from the Olympic Games in Rio.

That was after its independently commissioned report found evidence of a four-year, state-run "doping programme" across the "vast majority" of the 28 Olympic sports.

Russia's full Olympic team would have consisted of 389 competitors. Of those, 271 were cleared to take part by a three-person International Olympic Committee panel.

However, that number is still rising despite the Games now being under way, with the Court of Arbitration for Sport (Cas) handling a number of appeals.

Here's the list of the sports in which Russian athletes have so far been cleared to compete. 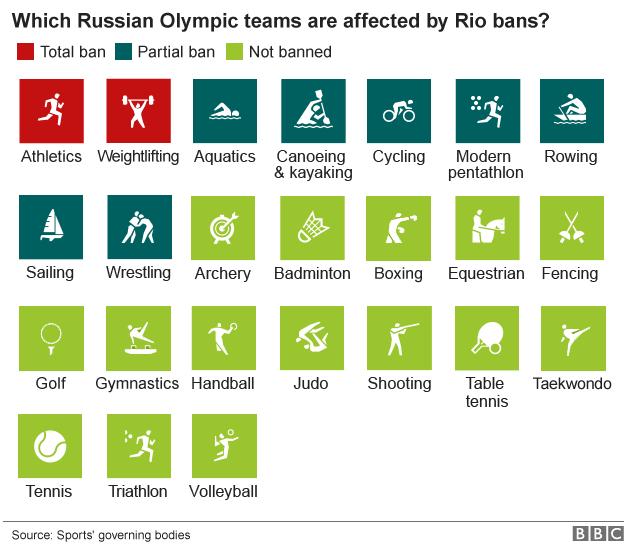 Decision: Some Russians have been banned and further rulings are still expected following appeals to Cas.

London 2012 bronze medallist Yulia Efimova partially won an appeal against her ban on Thursday, 4 August as Cas said it was wrong to stop athletes going to Rio on the basis they had previously been sanctioned. It sent her case back to swimming's governing body for reconsideration as a matter of urgency and she was cleared to compete later the next day, ahead of her first heats.

Decision: World Archery said the three Russians have been "tested extensively" and had no previous doping convictions. It expressed "shock and concern" over recent allegations but praised the IOC's "courageous decision" not to give Russia a "blanket ban".

Decision: All 68 Russian athletes have been banned, though US-based long jumper Darya Klishina has been cleared to compete under a neutral flag.

Yuliya Stepanova, the 800m runner whose evidence helped expose the Russian doping scandal, will not be allowed to do the same, however. The IAAF had previously cleared her to compete, but the IOC's latest ruling disallows any athlete with a previous doping ban.

Stepanova has since questioned that ruling, describing it as "unfair".

Decision: Governing body the AIBA reviewed each case and cleared each boxer on Thursday, 4 August - and that decision was ratified by the IOC.

Decision: Eighteen Russians remain eligible after the International Canoe Federation "immediately suspended" five of the 23 qualified, as they were named in the McLaren report, pending further investigation.

However, the ROC says one case is still outstanding.

Decision: Governing body the UCI says 11 of Russia's 17 athletes have been cleared to compete, with three withdrawn by the ROC and another three implicated in the McLaren report into state-sponsored doping - their cases are still outstanding.

Decision: Fencing's governing body the FIE cleared all 16 Russians to compete, saying it had "re-examined the results from 197 tests taken by Russian athletes in 35 countries, including Russia, between 2014 and 2016", which were all negative.

Decision: On Thursday, 4 August, the IOC panel confirmed the eligibility of Maria Verchenova to compete.

Decision: The International Gymnastics Federation announced on 4 August that the IOC had approved 20 gymnasts.

Decision: The International Judo Federation, whose honorary president is Russian President Vladimir Putin, cleared all Russians to compete, with president Marius Vizer saying they had been tested from last September to May "on many occasions, at many international judo events, abroad from Russia".

Decision: One of the four qualifying Russians, plus a reserve, have been banned by governing body the UIPM, after being implicated in the McLaren report's 'Disappearing Positive Methology' scheme. The remaining three have been cleared to compete.

Decision: Russia's initial squad of 28 was reduced following 22 suspensions. Fisa said the latest banned athletes were "not considered to have participated in doping" but did not meet the IOC's criteria of having been tested in labs outside of Russia. An appeal by 17 rowers failed.

Decision: World Sailing initially suspended Pavel Sozykin but cleared him to compete alongside his other six team-mates.

Decision: An ISSF statement said all 18 Russian shooters are eligible having not been mentioned in the McLaren report, nor tested positive through further doping controls. The governing body added "all Russian athletes are being carefully monitored" by its intelligence-based testing programme.

Decision: "An investigation which included an individual test analysis of each player, conducted outside the Russian anti-doping system met the necessary requirements," said the International Table Tennis Federation.

Decision: Taekwondo's federation has confirmed all three nominated Russians will compete in Rio.

Decision: The International Tennis Federation said the nominated Russians have been tested 205 times between them since 2014, adding that is "sufficient" for them to go to Rio.

Decision: Governing body the FIVB said it had "conducted a full examination of the Olympic eligibility" of all Russian volleyball and beach volleyball players and had now submitted them all to the IOC for approval.

Decision: All eight Russian weightlifters have been banned from the Games.

The International Weightlifting Federation confirmed two had been banned for doping violations, while another four were named in the McLaren report into doping.

United World Wrestling appointed a "special commission with the mandate to review the doping cases related to the Russian wrestlers currently qualified to compete for the Rio Games".

On returning its findings, the governing body said Viktor Lebedev, who returned a positive doping test at the 2006 Junior World Championships, will be banned from competing.

However the ROC said one case is outstanding.