From ballet beginnings to hammer heights.

That is the unusual sporting journey Sophie Hitchon, 25, has made on her way to competing in her second Olympics, in Rio, this summer.

At the age of 14, Hitchon, from Burnley, had been practicing ballet for over 10 years. Three years later, she would be crowned Commonwealth Youth Games gold medallist in the hammer.

"It was a bit of a whirlwind," her father Michael told BBC Sport. "In the space of 12 months she'd gone from not being able to throw, to an Under-17 British record."

After improving on her British record at the World Athletics Championships in Beijing last summer, she is hoping for even more in Brazil.

"Ballet takes a lot of strength in yourself and it helps to develop that from a young age," she told BBC Sport. "It teaches dedication to sport and how to control your direction."

Initially focusing on sprint events when she first started track and field, Hitchon took the opportunity to try the hammer throw and has never looked back.

"There are plenty of local clubs to have a go at different events, it's all about finding a local club and seeing what's available," she added.

Setting a new Under-17 Women's national record in 2007, she won European Under-23 gold in 2013 and took a bronze medal at the Glasgow Commonwealth Games two years ago.

At the World Championships in Beijing last summer, she improved her British record with a throw of 73.86m.

Sophie's father is a former English Schools champion in the 100 metres and initially coached Hitchon when she took up the sport.

"The strength aspect of dancing came in really well for a future in sport through balance, poise and strength building," Michael Hitchon added.

"It sets the mind and performing in front of people at a young age does all really help."

'Over one million throws' 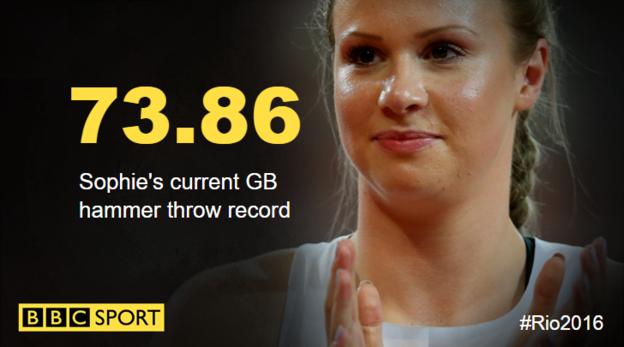 "I think the event is under appreciated. They have to be everything really - a sprinter, a jumper and a thrower.

"You can get a hammer thrower that can run really fast, throw a long way and jump a long way. It's a bit like being a multi-eventer really.

"Her whole mentality is about competing for her country. When she pulls on a British vest it's a massive thing for her."

From the competitors of the hammer final at London 2012, gold medallist Tatyana Lysenko along with 11th-placed Maria Bespalova, both from Russia, have since tested positive for banned substances. Sophie Hitchon says she will not let this affect her mentality.

"There are a lot of issues in athletics and hopefully the people that can sort it are doing the right things," Hitchon stated.

"I can only focus on myself and make sure I'm doing the right things."

"The girl who suffers is the one who comes 13th and doesn't get a chance to compete for an Olympic medal." 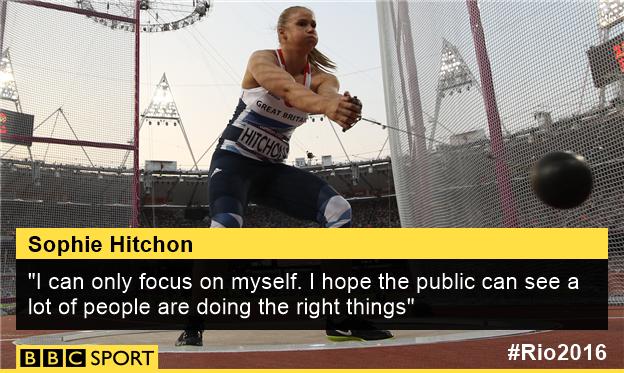 The countdown to the Opening Ceremony of Rio 2016 begins this Friday at 20:30 BST on BBC One. Hammer throw qualifying begins at 00:40 BST on Saturday 13 August.