More Russian athletes have been banned from competing at next month's Olympics by their sports' governing bodies.

Federations must rule on whether Russians can compete in Rio following the country's doping scandal.

The Union Cycliste Internationale said three cyclists were withdrawn due to previous drugs cases, with another three implicated in the doping scandal.

Following a report conducted by Canadian law professor Richard McLaren, which said Russia operated a state-sponsored doping programme from 2011 to 2015, the International Olympic Committee ruled any Russian athlete who has served a doping ban will not be eligible for Rio 2016.

So far, more than 110 of the 387-strong Russian team have been banned from the Games, which get under way on 5 August.

The final line-up will be announced on 30-31 July, according to the Russian Olympic Committee (ROC).

Eleven of Russia's 17-strong cycling squad have been cleared to ride in Brazil.

United World Wrestling cleared 16 Russian wrestlers, while all four Russian badminton players have been told by the sport's governing body they can compete.

Badminton World Federation's Thomas Lund said the governing body was satisfied the athletes had been tested in and out of competition.

"We have had a rigid drug-testing programme, especially leading up to Rio 2016," he added. "Their samples have been analysed outside of Russia."

"We will tell how many people will go in the next few days," said Alexander Zhukov, the head of the ROC.

'We will fight for those not able to go'

About 70 Russian athletes left Moscow for Brazil on Thursday, following a farewell ceremony hosted by Russian president Vladimir Putin in the Kremlin.

"They have got us fired up but in a good way," said handball player Polina Kuznetsova of the cheering crowd at Moscow's Sheremetevo airport.

"We are going to fight more to prove that it is difficult to break Russia. We will fight for those who were not able to go."

Olympic champion pole vaulter Yelena Isinbayeva and world champion hurdler Sergey Shubenkov are among 67 of the 68-strong athletics team to have been banned by the International Athletics Federation.

Isinbayeva corrected reports on Thursday suggesting she might be the Russian team's flag bearer in Rio, despite not being able to compete.

"We should clarify one very important thing!" she said via Instagram. "Flag bearer at the Olympics in Rio have already been defined, it is a great athlete, Olympic champion Sergey Tetyukhin (volleyball)." 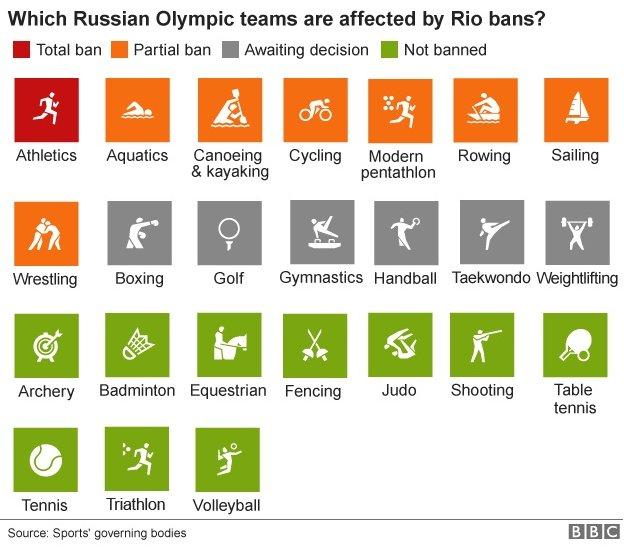