O'Connor broke the British record as she finished behind Hungary's Katinka Hosszu in the 200m individual medley.

The relay team were second behind the USA for GB's sixth medal in Rio.

Michael Phelps swam the final leg for the Americans as he claimed his 21st Olympic title, having earlier won the 200m butterfly.

Away from the competition, a bus carrying journalists between venues had two windows smashed after stones were thrown at it, while it was confirmed Irish boxer Michael O'Reilly had failed a drugs test and will not fight at the Games.

It was another day of stunning action and incident in Rio:

London had already been awarded the 2012 Olympic Games by the time O'Connor started swimming at the age of 10.

Born and raised in Somerset, she has achieved spectacular success despite suffering from ulcerative colitis, a chronic bowel disease.

O'Connor is the first British woman to win an Olympic medal in the 200m medley and nearly caused a huge surprise as she closed in on Hosszu, who has now won three gold medals in Rio.

"It doesn't seem real but seeing my family, I was getting choked up," she told BBC Sport. "It means everything. It has been tough but it is so, so worth it."

Her proud father Sean held back tears as he paid tribute: "I don't think it's going to get better than this for me, to be honest. You're more proud of your children doing well than your own achievements."

The men's relay team of Stephen Milne, Duncan Scott, Dan Wallace and James Guy were second to a dominant USA.

Guy, who overhauled Japan's Takeshi Matsuda on the final leg, said: "The team is young and we'll be ready for the title at Tokyo 2020."

Analysis - BBC chief sports writer Tom Fordyce: "A second special night in the pool for Britain's swimmers. After Adam Peaty and Jazz Carlin two nights ago, this was another story of personal bests produced when it mattered most, of the best possible result being taken on the biggest stage of all.

"In taking silvers behind both, O'Connor and the quartet of Milne, Scott, Wallace and Guy have put British swimming wonderfully back on course."

Where does that leave Team GB?

Back in business after frustration earlier in the day.

Britain - with one gold, three silvers and two bronzes - are 11th in the medals table, which is topped by the United States, followed by China and Hungary.

GB could not end an 88-year wait for a medal in the women's gymnastics team event as gold went to the United States, led by the dazzling Simone Biles.

However, defending tennis champion Andy Murray moved into the last 16 of the men's singles and fellow British number one Johanna Konta fought her way into the women's quarter-finals. 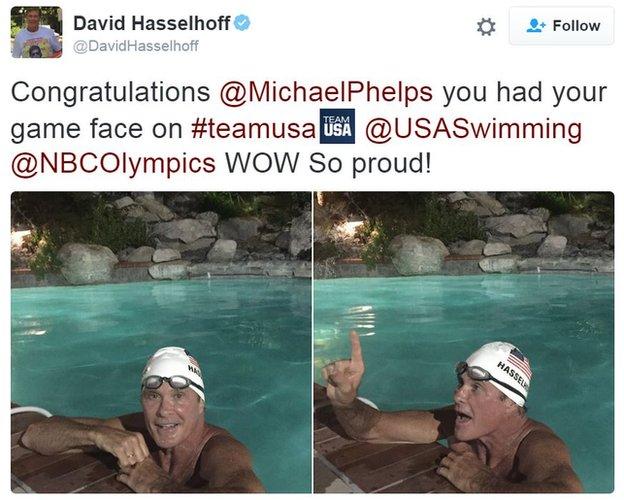 Phelps, the most decorated Olympian of all time, helped the US win the relay by a wide margin.

The 31-year-old, who came out of retirement in 2014, began the evening by avenging his defeat to South African Chad le Clos at London 2012.

"I came into the pool with a mission and the mission was accomplished," said the American.

Phelps has won more than twice as many Olympic gold medals as the athlete next on the list, former Soviet gymnast Larisa Latynina, who has nine.

Compatriot Katie Ledecky, 12 years his junior, remains on course to win an Olympic freestyle treble after claiming gold in the 200m.

Japan caused arguably the greatest upset in rugby sevens history with a 14-12 win against New Zealand at Deodoro Stadium.

Syrian refugee Rami Anis earned a standing ovation in the 100m freestyle as he set a personal best in finishing 56th out of 59 swimmers in the heats.

Greece celebrated their first gold since the 2004 Athens Olympics as Anna Koraki triumphed in the women's 25m pistol at the Deodoro shooting range.

There are no fewer than 20 medals up for grabs, with cycling, gymnastics, rowing, diving and swimming among the highlights.

12:30 - Cycling: GB's Emma Pooley rides in the women's time trial. At 14:00, Chris Froome is among leading contenders for the men's race.

16:30 - Rugby sevens: Britain's men have a tough test against New Zealand before the knockout stage begins.

20:00 - Gymnastics: Max Whitlock seeks Britain's first medal in the all-around event since 1908, though Japan's Kohei Uchimura is the hot favourite.

02:00 (Thursday) - Swimming: Andrew Willis won his semi-final and leads British hopes in the pool, competing in the 200m breaststroke final.