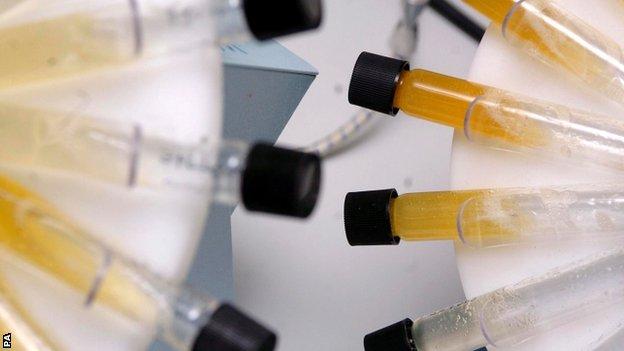 The International Olympic Committee (IOC) is wasting a "once-in-a-lifetime opportunity" to fight drug cheats, it has been claimed.

The Institute of National Anti-Doping Organisations (iNado) said the IOC's stance on doping was "confusing" and "indefensible".

And iNado said the World Anti-Doping Agency (Wada) must be more independent from sporting authorities.

Wada is co-sponsored by the IOC and international governments.

Following the fallout of the Russian doping scandal talks are ongoing on what powers Wada should have to sanction entire countries or sports that breach the rules.

The iNado chairman Doug MacQuarrie and chief executive Joseph de Pencier say that although the IOC seems to accept the need for a more independent Wada, by demanding "equal representation" on Wada's board and executive committee it was "essentially arguing for the current system, which has repeatedly failed to make the rights of clean athletes the primary concern".

The organisation has called on the IOC to leave anti-doping to independent experts, which has been mooted as a means to avoid conflicts of interest.

IOC 'must step back'

In an open letter they wrote: "The inconsistency of messaging from the IOC on the matter of independence of Wada is confusing.

"If it is serious about empowering Wada to be free from the influence of sports organisations, the IOC must step back from its efforts to maintain its operational influence."

The pair also questioned the IOC's warning about "national interests" being as much of a problem for Wada as interference from sport, pointing out that the IOC itself failed to ban Russia from the Rio Olympics.

"This premise is indefensible... sadly, faced with the greatest example of 'national interests' subverting clean sport in the history of the modern Games - the misconduct of Russia - the IOC has yet to respond with any form of meaningful national sanction," they wrote.

"Why did it not ban Russia outright until that country gets its anti-doping house in order, as Wada recommended?"

The pair also criticised IOC president Thomas Bach's plan for an Independent Testing Authority (ITA) to run all the drug-testing at not only the Games, but across all Olympic sports, year-round.

"It would be far more timely, cost-effective and efficient to invest in current independent anti-doping capacity than to spend tens of millions on an entirely new body that preserves a conflict of interest," they wrote.

And they rejected the idea that only the Court of Arbitration for Sport should be allowed to sanction those who break anti-doping rules.