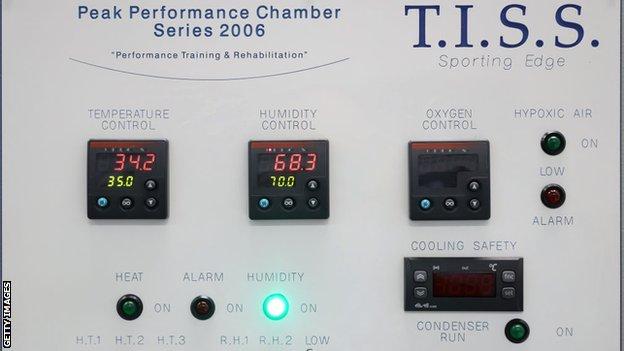 As storms batter the UK, there is a small slice of tropical Tokyo in rural England.

It is a chamber, just big enough to fit a cluster of gym equipment, where it is about 35C and 60% humidity.

But this was not designed to be an escape from the wind and rain of an English winter.

It is an integral part of Team GB's preparations for the Olympic Games, helping athletes acclimatise to the expected conditions in Japan this summer.

Olympics organisers have already imposed measures to combat expected conditions for the Games in Tokyo, which regularly sees temperatures of 35C and 80% humidity in July.

The marathon and race walking events have been moved to the cooler north of Japan, while snow machines have been trialled to help spectators cope with the heat.

And for British athletes, the heat chamber at the English Institute of Sport's (EIS) Bisham Abbey base in Berkshire is the first step on the road to acclimatisation.

Stepping into the chamber is a little overwhelming at first, sort of like a torturous combination of a steam room and sauna.

But that is the point. Athletes need to face the physical and mental struggle of competing in such sticky heat so that on the day of the event, one of the most important days of their lives, they are not caught off-guard.

And so no-one can avoid it. The chamber has seen mechanical horses for the equestrian teams and archery targets were once set up in there too.

Even indoor sports get their slot. Fencers are expected to visit soon so they understand what it will be like outside when they are not competing.

"It's so the athletes can know they can cope, how they will feel and what they can do to make it more manageable," says EIS performance innovation consultant Dr Victoria Downie.

"For athletes living in a hot and humid environment, it is naturally easier to perform.

"With all the preparation we are doing, our athletes will know they are as well-prepared as all the other athletes and it won't be a disadvantage to them." 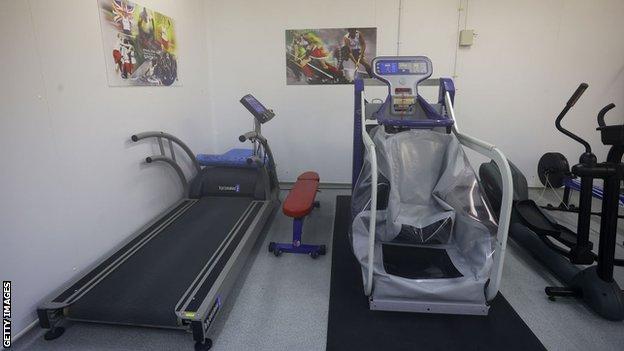 What about when Team GB are actually in Tokyo?

Athletes will spend more time acclimatising in Yokohama, just south of Tokyo, before the Games begin but that is just one part of Team GB's plan.

There will be protocols in place to keep athletes cool once they arrive in Japan too.

The team will take about 100 ice vests with them and there will be slushie machines to cool athletes down.

Although the kit has not yet been launched, white could be more common, a lighter shade of blue may be used and according to Team GB deputy chef de mission Paul Ford there will be "a wider array and better choice of hats".

"We're testing cooling interventions that are tried and tested in the heat chamber so that when they get to Tokyo they've done it before," explains EIS performance innovation consultant Luke Gupta. 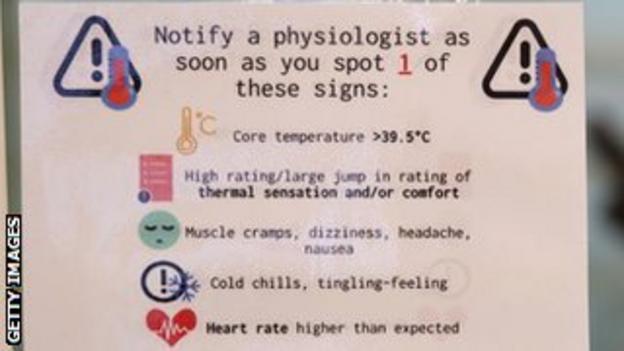 Will the conditions in Japan be dangerous?

Although it is hoped that the chamber will help Great Britain produce medal-winning performances, Dr Downie says the main priority is safety.

Sports identified as "high-risk" include any outdoor endurance events lasting longer than 30 minutes, including rugby sevens, hockey and tennis.

Such sports will spend more time in the chamber than more sedentary events. For example, triathlon and marathon athletes will train in the chamber every day for 10 days.

The EIS has created a one-page document explaining what to do if an athlete suffers exertion heat stroke, something it says is unlikely but if it should happen a delay in treatment can be life threatening.

Scotland's Callum Hawkins collapsed during the marathon in 28C heat at the 2018 Commonwealth games in Australia, while 28 of the 68 starters withdrew at the 2019 World Championship marathon in Doha, run in 32C and 70% humidity.

But because of the work done in the chamber, Dr Downie says she is "not worried" about endurance athletes.

"We're aware of which sports are at higher risk so more time and effort is put into preparing those athletes," she explains.

"We've prepared them well. The athletes will see that as a performance advantage. In some ways the high-risk sports will be a low risk because we are spending more time working with them."