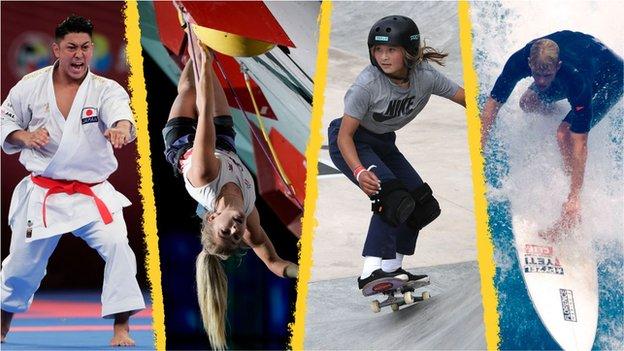 It's been a long time coming, but finally, the Tokyo 2020 Olympics are almost upon us.

Everyone has their favourite sports that they make sure not to miss when the Games roll around, but there are plenty of new additions to get excited about this year.

The International Olympic Committee added five sports - and 34 new events in total - to the Tokyo programme in a bid to attract younger audiences and reflect "the trend of urbanisation of sport".

So what's new? Let's get you up to speed.

Karate originated on the Japanese island of Okinawa, and there are two disciplines of the martial art being contested in Tokyo - kata and kumite.

Kata - which means 'shape' or 'model' - is a solo discipline, in which competitors, or karatekas, are judged on a series of pre-approved choreographed offensive and defensive movements.

Kumite, on the other hand, is a combat discipline, and sees karatekas go head-to-head in a three-minute fight. There are three weight classes and they are awarded points for the techniques used.

There will be 80 athletes competing in karate events at Tokyo 2020 - 60 in kumite and 20 in kata. Both will have an equal split of men and women competing.

Japan have long dominated karate's World Championships and Ryo Kiyuna, who is from the sport's heartland, Okinawa, is a three-time kata world champion.

But watch out for Spain too - Damian Quintero and world champion Sandra Sanchez are the top-ranked karatekas in the kata discipline.

Spain's multi-world and European medallist Damian Quintero is also an aeronautical engineer, but quit his job to focus on karate full-time when it was announced as an Olympic sport.

There are two disciplines of skateboarding, street and park. Competitors perform individually and are ranked for the overall level of difficulty and originality of their routines.

Street skateboarding sees athletes take on obstacles including rails, stairs, kerbs, benches, walls and slopes, using each section to demonstrate their skills and tricks during a set time limit.

Eighty athletes will compete among four medal events, with men and women competing in both disciplines.

Hers is probably a name you've heard by now, but Britain's Sky Brown could well be a contender in the women's park, having won World Championships bronze in 2019. She has just turned 13 and is Team GB's youngest ever summer Olympian.

In the men's event, Americans Heimana Reynolds and Tom Schaar will be up there, the latter being the first skateboarder to land a "1080", which is three revolutions.

Brazil's Leticia Bufoni is among the favourites in the women's street, but youngsters Pamela Rosa and teenager Rayssa Leal, both of Brazil, plus Japanese skater Aori Nishimura have put her under pressure in recent years.

Japan are tipped to win half of the skateboarding medals at Tokyo 2020, but the sport is still considered "an activity for unruly kids" in the country, according to team coach Daisuke Hayakawa.

At the Olympics, athletes will compete in all three disciplines of climbing - speed, bouldering and lead.

For the speed event, two athletes climb a 15m-high wall side-by-side on identical routes. It's simple - the first to the top wins.

In bouldering, climbers complete a set number of routes, known as problems, in as few attempts as possible on 4.5m-high structures (boulders) with steep overhangs.

Lead climbing is likely to be what you picture when you think of indoor climbing. It will see athletes climb as high as they can within six minutes on a 15m wall.

At the end, their rankings are multiplied to give a final score, with the top eight progressing to the final where they do it all again.

Bouldering specialist Shauna Coxsey will be the sole climber for Team GB in Tokyo, and could be among the medals having won combined bronze at the 2019 World Championships.

Slovenia's six-time world champion Janja Garnbret is the favourite to win gold, while young Italian Laura Rogora is an up-and-coming talent who could also be in with a shot of a podium place.

In the men's event, five-time world champion Adam Ondra of the Czech Republic is a favourite, while French siblings Mickael and Bassa Mawem will be competing against each other.

Look out too for Spain's Alberto Gines. The 18-year-old is from the very flat region of Extremadura and previously said reaching the Olympics was "like a surfer from the Sahara making it".

Climbing shoes are so tight that athletes' toes curl up. This makes it easier for them to cling to walls with their feet.

The surfing competitions will take place at Tsurigasaki Beach, some 100km away from the Olympic Stadium in Tokyo.

During 30-minute heats, athletes will try to catch as many waves as they can, typically around 10-12. Only their two highest-scoring waves are counted.

With no two waves the same, a panel of five judges will assess their performance using a five-point system based on criteria including degree of difficulty, innovation, speed, power and flow.

The competition is a knockout format, although no-one will be eliminated in the opening round, with lower-ranked surfers going into a repechage-style round.

Early heats will feature four or five athletes at one time, before they become head-to-head from round three onwards.

There will be 20 men and 20 women competing.

The top surfers will come from Australia and the US, but watch out too for Brazil, who have won four of the last six men's world titles - two of which went to Gabriel Medina.

Two-time world champion John John Florence pipped the 'Michael Jordan of surfing' Kelly Slater to the final US spot, while in the women's, Carissa Moore, who like Florence is from Hawaii, heads to Tokyo with four world titles to her name.

But don't forget Australia's Stephanie Gilmore who, with seven world titles, is one of the most decorated professional surfers ever.

The four days of the surfing competitions will be held during the Olympic Surfing Festival from 25 July-1 August. This allows the dates of the competitions to be moved to ensure the best wave conditions possible.

Technically, baseball and softball aren't 'new' sports on the Olympic programme, but they haven't been contested at a Games since Beijing 2008.

The basics for both sports are simple. Make the most runs from hitting the ball, before running around bases to reach the home plate.

They key difference between them, however, are that in baseball, the pitcher bowls overarm, while they do so underarm in softball.

Both sports will start with a round-robin format, before baseball progresses into knockout games and softball moves straight to the medal matches.

There will be six teams in each sport, but no British representation in either. Baseball will be played by men only, and softball women only.

Unlike basketball, many of the sport's biggest stars will be absent from the Games as the Olympics clash with the Major League Baseball (MLB) season in the US.

The United States have won the last two softball World Championships and will be looking to win back the Olympic title they lost to Japan back in 2008.

In baseball, Japan won the 2019 Premier12 tournament - an international championship featuring the 12 highest-ranked national teams in the world. They're likely to be among the medals on home soil.

Baseball is hugely popular in Japan, with the sport's popularity rocketing after World War II due to the influx of American soldiers. In a 2018 study, 48% of respondents said it was their favourite sport.

What else is new?

There will be nine new mixed gender events across seven sports:

There are also further new events debuting at the 2020 Olympics. They are: