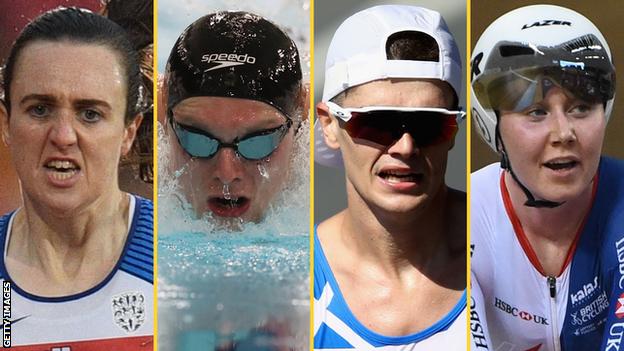 A 53-strong Scottish contingent, across 16 sports, are in Tokyo dreaming of one thing - Olympic glory.

The delayed showpiece finally got under way on Friday, 12 months later than planned, with competitors hoping their years of painstaking and gruelling preparation will pay off.

Both London 2012 and Rio 2016 yielded 13 medals for Scots, the country's highest total of any Games.

So in assessing the main podium contenders this time, who better to ask than two former Olympians?

Hannah Miley competed at three successive Games from 2008 to 2016 and assesses her fellow swimmers, while recently retired Eilidh Doyle won 4x400m relay silver in Rio five years ago and looks at the track athletes.

"A quietly determined young man who will want to prove his worth in the water. He has a great chance here to add to his two Olympic sliver medals from Rio 2016.

"Duncan is very versatile, he's qualified for the 200m freestyle, the 200 individual medley, and multiple relays. So his name is going to be coming up quite a lot. The last couple of years he's really broken through and is certainly the key athlete to be on the podium in both relays and individual."

"I think he's in a strong place. His event, the 200m breaststroke, is really high quality. There are a lot of swimmers who have taken the event to the next level. There is not much separating the top 12 to 15 - it's all coming down to a hundredth of a second - and it's really anyone's game.

"If he can nail his competitive turns and really fight for the finish, we can hopefully see him in the finals and getting up there in the medals."

"She's starting to make that breakthrough. At the trials in April, she placed herself in the top three or four athletes in the world for the 100m backstroke. She has huge potential in the 200m as well.

"It's her first cap for an Olympic team, so she is going in with fresh ambition and in the form of her life. She has huge potential to be up on that podium. If she can get the finer details right, it could go either way. She is one to look out for."

"Both are in fantastic form. Laura was going to double up and do the 800m and the 1500m but has pulled out of the 800m. At Rio 2016, the turn of pace from Tirunesh Dibaba was where she lost the race, but now Laura has that in her armoury so she'll be going into the 1500m very confident.

"And it's great for Jemma to know her biggest rival is not in her event now. It's funny times during the pandemic, but as training partners, they've been able to stay together, travel together and have that familiarity. If you can have as much normality as you can, that's the best thing.

"I think she'll relish the talk about trying to live up to the feats of her mum Liz [who won 10,000m World Championships gold in Tokyo in 1991]. She's had her mum's personal bests as targets throughout her career and also has her in her corner as coach.

"Liz has been there, done it. That's the best person to be giving her advice. She can be honest with her, they can chat about it and she'll be as well prepared as possible. You want to be peaking in time for the Games and Eilish broke the British 5,000m record in Oslo earlier this month."

"Jake has just been plugging away. I remember him at Glasgow 2014 as a fresh-faced newcomer on the team.

"He has been training really hard and him and Josh, they were first and second at the trials, they ran such a great race and have good speed as well. That's the thing, the 1500m is tactical, you need to be smart racers. Josh and Jake have that. It's about negotiating the rounds safely, not doing anything silly and getting into the final."

"I think he has a bit of a point to prove after the Gold Coast [Hawkins was leading the marathon in the 2018 Commonwealth Games when he collapsed a mile from the end]. He doesn't want to be remembered for that.

"He finished fourth at the last World Championships and definitely has the potential to win a medal in Tokyo. It's just getting through what is a brutal event. It's going to be hot, but I think Callum has learned a lot."

Perhaps the most eminent Scot competing in Japan is Andy Murray, who aims to win singles gold for the third Games running. Murray also pairs up with US Open doubles winner Joe Salisbury.

In the pool, diver Grace Reid is a strong contender as the reigning Commonwealth champion in the 1m springboard.

A gold medallist in the women's team pursuit five years ago, Katie Archibald will bid to add to her Rio success at the velodrome.

Seonaid McIntosh will follow in the footsteps of elder sister Jennifer when she competes in the rifle shooting events. As world number one, McIntosh is heavily fancied to make the podium.

Scott Brash is also among the medal contenders in the equestrian jumping, having won gold in the team event at London 2012.

A broken foot deprived Andrew Butchart the opportunity to represent Scotland at the Gold Coast Commonwealth Games three years ago. He is out to better his sixth-place 5,000m run in Rio.