How are GB doing? 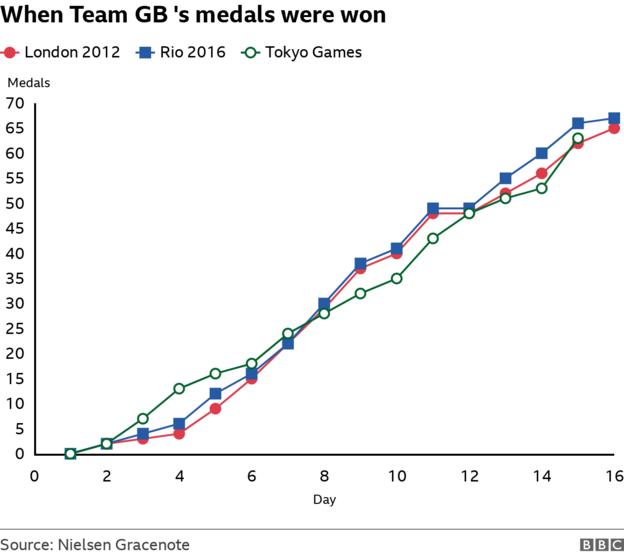 Great Britain have ended the penultimate day of Tokyo 2020 with 63 medals, one more than at this stage at London 2012 and three fewer than Rio 2016 after 15 days. The 20 gold medals are seven behind Rio and eight behind London. The final day in Rio delivered Joseph Joyce's boxing silver medal. In London, Anthony Joshua won boxing gold on the last day amongst three medals.

This year though, there are track cycling events on the last day with Jack Carlin and Laura Kenny as strongest potential medallists. In addition, Team GB have a guaranteed 64th medal from Lauren Price and Callum Hawkins amongst the best marathon runners.

As expected, ROC won three gold medals to overtake Great Britain on the medal table on day 15. Both have 20 gold medals but ROC have won five more silvers. On Sunday, ROC have two opportunities to win golds - in rhythmic gymnastics and handball. Russia won both of these events at the last Olympic Games and are favourites to win both again. To finish fourth on the medal table, Great Britain probably need to win two gold medals on Sunday and hope that ROC do not win both of these events.