After more than a decade of dominance the era of Usain Bolt is over and someone other than the Jamaican great will be crowned men's 100m champion at the Tokyo Olympics.

Bolt will go down as one of the greatest athletes of all time having stormed to 100m victory at the Beijing, London and Rio Games, adding three successive 200m golds for good measure.

But the world record holder retired from athletics in 2017, finally giving someone else a chance of glory.

With time having also caught up with 2004 gold medallist Justin Gatlin, and world champion Christian Coleman serving an 18-month anti-doping ban, this feels very much like the start of a new era in the Olympics' traditional blue riband event.

Who is ready to write their name in the history books? Here are some of the contenders.

Once considered a potential heir to Bolt's throne, Trayvon Bromell endured three injury-ravaged years that included tearing his achilles tendon during the 4x100m relay at Rio in 2016.

After leaving the track at the previous Olympics in a wheelchair, a coronation in Tokyo would feel like a moment of redemption.

A former US champion at 400m, Fred Kerley raised eyebrows when he chose to race at 100m and 200m, but showed he is more than capable over shorter distances by setting a personal best of 9.86 to come third in the 100m at the US Olympic trials.

A man of many talents, he cannot be discounted here.

Ronnie Baker is another athlete who looks to have put his injury problems behind him. The 27-year-old's best year to date came in 2018 when he earned world indoor 60m bronze and set personal bests over that distance and 100m. Persistent injuries then hampered him throughout 2019 and he missed out on a place at the World Championships.

However, he shaved 0.02 off his lifetime best when finishing second at this year's Olympic trials in 9.85 seconds - one of just two defeats this season, which has included Diamond League wins in Stockholm and Monaco.

Andre de Grasse heads to Tokyo with an impressive track record. He won the 100m bronze, 200m silver and sprint relay bronze in Rio, following that up with bronze in the 100m and silver in 200m at the 2019 World Championships.

Injury and illness have hampered his progress since then, although he ran a season's best 9.92 in Jacksonville in May.

If he can win gold he would follow in the footsteps of Donavan Bailey, who won the 100m title for Canada at the 1996 Games in Atlanta.

Akani Simbine is aiming to become the first African to win the Olympic 100m title since South Africa's Reggie Walker at the 1908 London Games.

He is another sprinter with decent pedigree, having finished fourth at the 2019 World Championships, and fifth at the 2017 Worlds and the 2016 Rio Olympics. He is also the reigning Commonwealth champion and has run sub-10 seconds in seven successive years.

The 27-year-old set an African record of 9.84 seconds in Hungary in July, shaving 0.01 off the previous mark set in 2006. It also bettered the national record of 9.89 he had set at the same meeting five years ago. 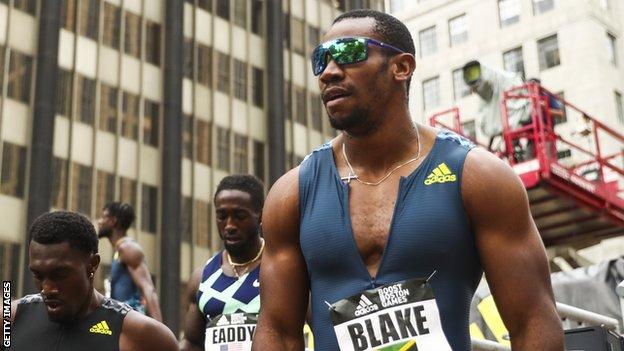 Could the 100m gold stay in Jamaica? Yohan Blake has long been tipped as a potential successor to Bolt, with his personal best of 9.69 only bettered by his more celebrated compatriot.

He won 100m gold at the 2011 World Championships and is a 2012 double Olympic silver medallist. However, he hasn't dipped below 9.90 seconds since those heady days and it is nine years since he won an individual major medal, with his season's best 9.98 in the Jamaican Championship semi-finals.

What about the Brits?

Zharnel Hughes has the fastest personal best of the three British contenders for the 100m - with his 9.91 in Jamaica in 2018 putting him second on the British all-time list alongside James Dasaolu and behind 1992 Olympic champion Linford Christie's 9.87. The 26-year-old is also the reigning European champion and reached the final at the 2019 World Championships.

Reece Prescod took silver behind Hughes at the 2018 European Championships. He won the British title in 2017 and 2018 and has a personal best of 9.94 seconds.