Great Britain kicked off a golden Saturday by winning two of the new mixed relay events but there was disappointment for world champion sprinter Dina Asher-Smith.

Asher-Smith failed to reach the 100m final and later said she would drop out of the 200m because of an injury.

And their swimmers followed that up by winning the 4x100m mixed medley relay in a world-record time.

It takes GB's total medal haul in Tokyo to 28, with eight gold medals, four of those coming in swimming - the first time they have won that many in the pool in 113 years. 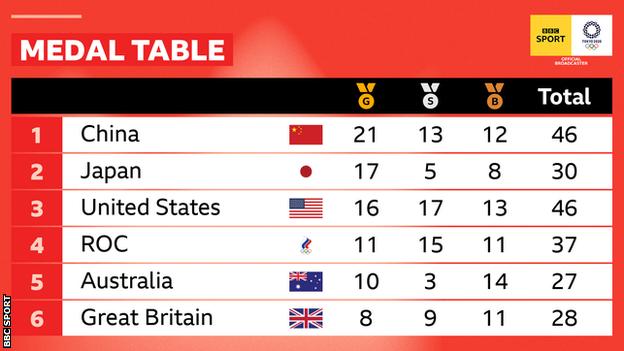 Double world medallist Asher-Smith was eliminated from the 100m after finishing third in the semi-final - and 10th fastest overall.

The 25-year-old spoke afterwards about her lack of preparation for the Games after suffering a hamstring tear and, in an emotional interview, said she would not compete in the 200m, an event in which she is the reigning world champion.

"It broke my heart because I am a competitor. It is the Olympics but there are plenty other championships for me to come and kill," she told BBC Sport.

GB's Daryll Neita edged through to her first major individual final by one one-thousandth of a second, but finished eighth as Elaine Thompson-Herah took gold in a Jamaican clean sweep.

And there will be three British women in an Olympics 800m final for the first time as Keely Hodgkinson, Alex Bell and Jemma Reekie all progressed to race for a medal on Tuesday, while Zarnel Hughes, Chijindu Ujah and Reece Prescod reached Sunday's men's 100m semi-finals.

In the boxing ring, Lauren Price guaranteed herself a podium place by reaching the middleweight semi-finals.

But Great Britain's women's rugby sevens team missed out on a medal, losing 26-19 to France in the semi-finals and later beaten 21-12 by Fiji in the bronze-medal match.

The 24-year-old withdrew from the women's team final and the individual all-around final earlier this week saying she needed to focus on her mental health.

A statement from the governing body said it was "in awe" of Biles, who is yet to decide if she will compete in the floor final on Monday and the balance beam final on Tuesday, and that she "continues to handle this situation with courage and grace".

'The Olympics? I've completed it'

Learmonth set the platform, Brownlee broke away from the pack and Taylor-Brown and Yee maintained the advantage to secure Britain's third triathlon medal of the week.

"It feels absolutely amazing. It's my third Olympics and I finally walk away with gold."

Britain finished 14 seconds ahead of the United States while France claimed the bronze medal.

"I can't believe it. I was slightly nervous being in a team of Olympic medallists and I'm just so glad we executed a brilliant race," said 33-year-old Learmonth.

History-makers in the pool

More success followed in the pool in another event introduced for the Tokyo Olympics, with GB taking a thrilling 4x100m mixed medley relay victory in world-record time.

It was Britain's fourth swimming gold in Tokyo - their best total since 1908.

"One word has changed the whole British team - belief," said Peaty, who also won gold in the 100m breaststroke.

Guy was also in the 4x200m freestyle relay team that won gold earlier in the week, and Tom Dean earned the other in the men's 200m freestyle.

Caeleb Dressel was part of a USA team that finished fifth in the 4x100m mixed medley relay but earlier claimed his third gold at the Games and set a new 100m butterfly world record in the process.

What are the new mixed events?

Changes to the schedule at Tokyo are the result of the International Olympic Committee pledging to make this the "most gender equal" Games and its president Thomas Bach saying they would be "more youthful, more urban and include more women".

It means as well as introducing events such as skateboarding, sport climbing and BMX freestyle, nine new mixed-gender disciplines were added to seven current Olympic sports.

The British team were hoping to add to the gold medals in triathlon and swimming in the final of the 4x400m mixed relay on the track, but they could only manage sixth as Poland stormed to victory in the inaugural event. They finished ahead of the Dominican Republic in second and the USA in third.

Other mixed-gender events have been introduced in archery, judo, table tennis and shooting, where San Marino won a first-ever silver medal and Spain took gold.

You can expect to see similar at next year's Beijing Winter Olympics, with mixed snowboarding, freestyle skiing, short track speed skating and ski jumping in the line up.

Wilson keeps it in the family

Wilson was guaranteed a medal heading into the final race of the women's windsurfing event and took bronze on her Olympic debut after a tense final leg.

"I just want to win, but any medal is amazing. I'm super happy and I just gave it everything I had."

In tennis, Serbian top seed Djokovic missed out on a medal, letting his frustration boil over as he lost the men's singles bronze-medal match to Spain's Pablo Carreno Busta 6-4 6-7 (6-8) 6-3.

Djokovic, 34, then pulled out of his mixed doubles bronze-medal match with an injury to leave Tokyo empty-handed.

A first-half strike from Matheus Cunha put the defending champions through to the semi-finals, where they will face Mexico on Tuesday.

Japan will meet Spain in the other last-four match.