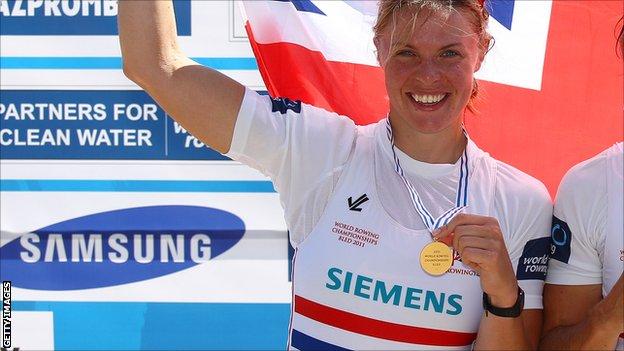 Berkshire-based rower Anna Watkins says her Olympic preparations are going well after setting a new world record for 5km on a rowing machine.

Watkins and women's double scull team-mate Katherine Grainger are among the favourites at the 2012 Olympics.

The rower set a new world best of 16 minutes 56 seconds - a seven-second improvement on her previous best.

"What we are putting in place now is the potential to win Olympic medals," Watkins told BBC Radio Berkshire.

The 28-year-old has recently returned from a warm weather training base and says she is feeling the benefits, with the Games now six months away.

Watkins took Olympic bronze in 2008 and is the reigning World Champion in the women's double scull.

"It was great weather and we had great training which helped," said Watkins at the GB rowing base in Caversham.

"Ultimately it does come down to one six-minute race and there is no getting away from that, but the more we do now the easier we can make it for ourselves in the summer."