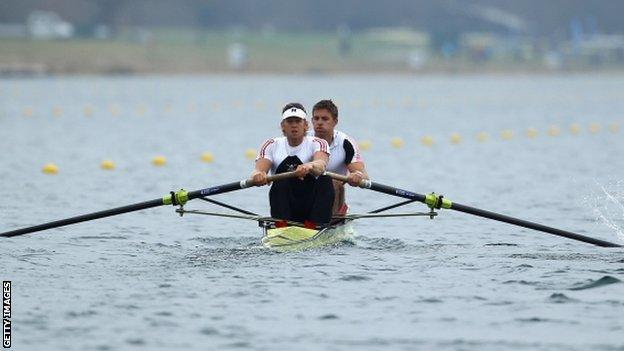 Andy Triggs Hodge and Pete Reed began the defence of their men's pair title with a confident display at the British trials at Eton Dorney.

The Olympic gold medallists beat world under-23 champions George Nash and Constantine Louloudis by half a length.

"It was close in the end but Andy and I had the race in control by 500m gone," Reed told BBC Sport after the 2km race.

I was trying to hurt my body a little bit. Hurt is all part of rowing

Medal hopes Katherine Grainger, Anna Watkins and Alan Campbell were among those to progress to Sunday's finals.

Rowers are competing against each other individually or in pairs, giving selectors a vital indicator before the World Cup squad is named on 4 April. Three World Cup races then follow before the Olympic squad is announced on 6 June.

Between the trials and the World Cup squad announcement in April, "crew testing" will take place as selectors take what they have learned from the trials and begin to put names on seats in specific boats.

One of the most intriguing decisions facing men's head coach Jurgen Grobler is the make up of the men's four - the country's blue riband boat in which the likes of Sir Steve Redgrave, Sir Matthew Pinsent and James Cracknell have helped Britain win gold at the last three Olympics.

The pressure is on last year's world-title winning quartet of Alex Gregory, Tom James, Ric Egington and Matt Langridge to prove they should remain together, with speculation that the four will be split up to accommodate Hodge and Reed, who won gold as part of the men's four in Beijing but have since been racing as a pair.

Hodge and Reed, who have won world silver for the last three years, gave themselves an early boost at the Olympic venue on Saturday by holding off Louloudis and Nash in their heat with a winning time of six minutes 22.69 seconds.

James and Egington then had a potentially significant win in the second heat, rowing past Gregory and Alex Partridge in the last 250m, although their winning time was seven seconds down on Hodge and Reed's effort.

"We've got the big race tomorrow, probably against Alex [Gregory] and Alex [Partridge], so we didn't want to do too much today. We just wanted to win the race," added Reed, who together with Hodge has won the men's pair at the national trials six times.

"Perhaps the race was harder than we needed it to be but it is a good learning curve for me and Andy, even if we've been together for a long time."

Greg Searle, the 39-year-old Olympic gold medallist from 1992, joined forces with Tom Ransley to come second in the men's pair repechage behind James Foad and Moe Sbihi and progress to Sunday's final.

Searle and Ransley were racing together after their regular partners, Cameron Nichol and Nathaniel Reilly-O'Donnell, were ruled out by injury and illness respectively.

Heather Stanning and Helen Glover, the world silver medallists in 2010 and 2011, coasted to victory in their heat in the women's equivalent competition, with Jess Eddie and Louise Reeve winning the other heat to progress to the final.

Grainger and Watkins, who went undefeated last year in winning their second double scull world title, went head-to-head in the single scull time trial, with the former coming out on top in a time of seven minutes 10.17 seconds.

Later in the day, Grainger and Watkins eased to victory in their respective semi-finals to qualify for Sunday's final.

"I'm pleased with today," said Grainger. "I've got two good races under my belt. Of course, Anna and I are competitive but we also want each other to do well because that will make the boat go quicker when we come together in a boat".

Northern Ireland's Campbell, who is looking to secure an eighth successive victory in the open men's single scull trial, looked comfortable as he finished fastest out of the two heats, with Sam Townsend and Beijing double-scull bronze medallist Matt Wells three seconds behind.

"Today was all about making sure you get a good opening race under the belt and then shifting your focus to the final," Campbell told BBC Sport.

"I was trying to hurt my body a little bit. You don't want to go along softly, softly and then get to the final and find you can't step to the next level. Hurt is all part of rowing."

David Tanner, GB Rowing's performance director, said: "We've had some great racing today and it's excellent to see the Olympic course in such an exceptional state - good conditions and fast racing.

"There have been some very tough calls to get boats into the A Finals but we know that tomorrow's finals will almost certainly be the most competitive that we have ever had a GB Rowing Team Senior Trials."