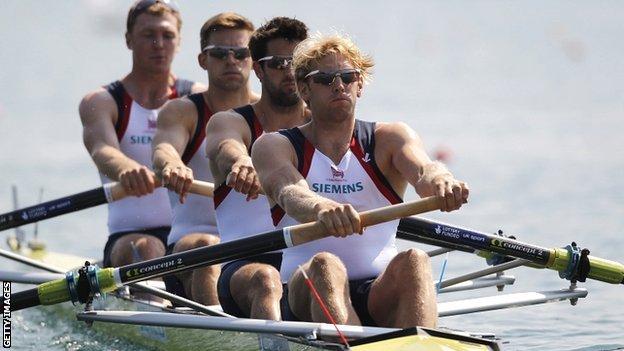 Great Britain's rowers got off to an encouraging start at the first World Cup of the season as seven crews went straight through to finals in Belgrade.

The three World Cup regattas offer the only chance of international racing before this summer's London Olympics.

Britain's new look men's four won their opening heat, as did Zac Purchase and Mark Hunter in the lightweight double.

Britain have sent a 57-strong team, made up of 23 women and 34 men, to Serbia and barring injury or loss of form the squad is likely to remain unchanged for the Olympics.

Seven British crews progressed straight to Sunday's finals on day one, with a further eight crews through to semi-finals and three still in with a chance in the repechages.

The men's four, made up of Olympic champions Pete Reed, Andy Triggs Hodge and Tom James and world champion Alex Gregory, were racing together for the first time internationally and eased to victory in their heat, two seconds clear of the Czech Republic.

"So much more to come as it's really early days for us," Reed posted on Twitter. "Technique, strategy, tactics, crew dynamics and fitness will all develop."

Last year's world bronze medallists Australia, considered to be one of Britain's main rivals for Olympic gold in London, have decided not to attend the event.

Purchase and Hunter, who struggled with injury and illness during last season, progressed with the quickest time of all in the lightweight double heats - three seconds faster than next best Italy.

Grainger, who is targeting her first Olympic gold in London after three successive silvers, and Watkins won their double scull heat in a time of six minutes 45.13 seconds to claim the fastest time of all.

However, Australia - last year's World Championships silver medallists behind Grainger and Watkins - are not competing.

Britain's men eight, without world under-23 champion Constantine Louloudis because of a back injury, held off a late surge from Poland to win their heat and reach Sunday's final.

The women's quad, the men's lightweight four and the double sculls of Bill Lucas and Sam Townsend, and Sophie Hosking and Katherine Copeland, were also victorious to take the British tally to 13 heat wins on day one.

Saturday sees the quarter-finals and semi-finals take place before finals day on Sunday.