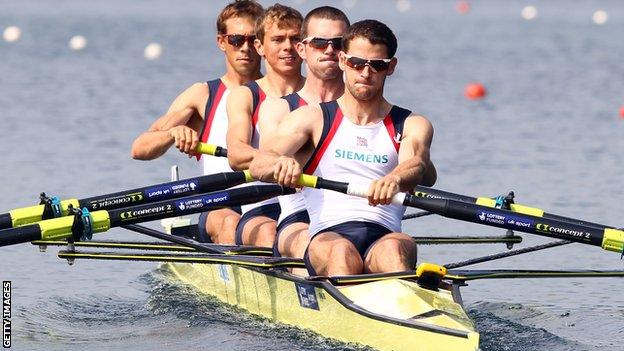 Coleraine rower Richard Chambers and his British team-mates had to settle for third in the lightweight four final at the World Cup regatta in Lucerne.

The British led after 500m and halfway but were behind winners China and the fast-finishing South Africa at the end.

China finished .61secs ahead of the South Africans with the British quartet 1.86 seconds off the pace.

Alan Campbell finished a disappointing fourth in the single scull final after leading at the 500m metre mark.

Campbell led Czech winner Ondrej Synek at the quarter distance mark but then suffered a bad second 500m as he slipped to fourth place.

The Coleraine man improved to third at the 1500m mark but he was passed by Cuban Angel Fournier Rodriguez in the closing 500m as Synek finished .52 seconds ahead of New Zealand's Mahe Drysdale.

Rodriguez was over five seconds behind adrift of Synek in third with Campbell a further 2.51 seconds in arrears.

The Northern Irishman won world championship bronze in 2011 and is regarded as a strong medal contender for the London Games but his performance in Switzerland was well below par.

Chambers' brother Peter was not in the British boat at the Lucerne World Cup meeting because of injury.

The Chambers brothers were part of the British lightweight four which won silver at the opening World Cup meeting in Belgrade.