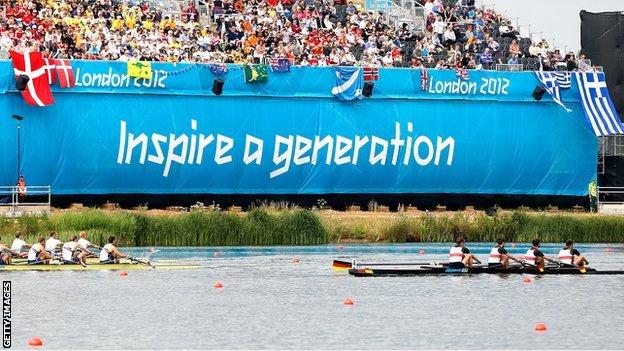 Eton Dorney has been awarded host status for the 2013 Rowing World Cup, after its role as a London 2012 venue.

The last time Eton Dorney played host to the regatta was in 2005, the only time the World Cup has come to Britain.

Organisers hope the famed "Dorney Roar" will be recreated from 21 to 23 June on a site that saw Team GB claim four gold medals at the Olympics.

"This event will help bring thousands of new fans and participants to the sport," minister Hugh Robertson said.

Eton Dorney's will be the second of 2013, with Sydney hosting the first in March and Lucerne staging the third in July.

This year, prior to the Olympics, the series travelled to Belgrade, Lucerne and Munich.

At the 2012 Games, Eton Dorney played host to the most successful Team GB rowing team of all time, with nine medals overall and golds in the men's four and women's pair,double sculls and lightweight double sculls.

"Hosting a World Cup in 2013 at Eton Dorney will give rowing the perfect opportunity to rekindle the magical atmosphere we enjoyed at the Olympic Games," British Rowing chairman Di Ellis said.

"It will provide a landmark event as a legacy for the sport where we can watch many of our 2012 medallists in action, celebrating their achievements, but also take a first look at those who may make a name for themselves in Rio."

British Rowing also has the option of hosting another Rowing World Cup event in 2015.