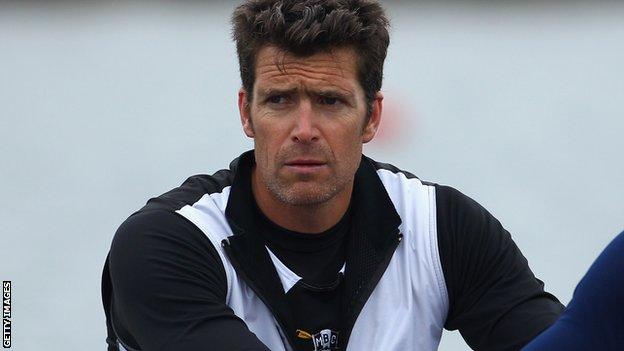 Greg Searle has retired from top-level rowing after adding a second Olympic bronze at London 2012 to the gold he won in Barcelona 20 years earlier.

The 40-year-old Briton spent a decade away from the sport before coming out of retirement to win a medal in the men's eight at Eton Dorney in August.

"The rowing part of my journey has come to a nice end," Searle told BBC Sport.

"I feel proud of what I have achieved. The fairytale would have been to win gold, but bronze is not bad."

He added: "At least I've won something for all my hard work."

Searle teamed up with brother Jonny and cox Garry Herbert to win gold in the coxed pairs at Barcelona 1992.

He returned four years later in Atlanta to win bronze in the men's four but dropped from first to fourth in a thrilling final in Sydney 2000 and retired from the sport soon after.

The lure of a home Games brought Searle out of retirement at the age of 37 and he succeeded in qualifying for the eight in London.

His GB crew headed eventual winners Germany at halfway in the final, before running out of steam with Canada pipping them on the line for silver.

"At the moment, I try and do things to keep me healthy but I sit on a rowing machine and after 15 minutes, I put the handle down," added Searle.

"In the past, I'd do more than two hours a day and still have the hunger to do more.

"For now, I've got a list, compiled by my sons and daughter, to get through. I've booked a couple of holidays and just bought a puppy.

"In the future, I'd like to still work with British Rowing, because I want London 2012 to have a lasting legacy."