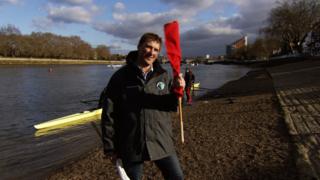 Pinsent to make debut as umpire

Matthew Pinsent, a four-time Olympic champion and three-time Oxford Blue, explains his role as umpire of the 2013 Boat Race, which takes place on Sunday.

Pinsent was assistant umpire for last year's race and described the event as "messy" after a swimmer in the River Thames forced a restart, and Oxford broke an oar in a clash moments after the resumption.

This year's contest will be the 159th edition, with Cambridge leading Oxford by 81 wins to 76 and one dead heat.

Watch The Boat Race live on BBC One and the BBC Sport website from 15:15 BST on 31 March.