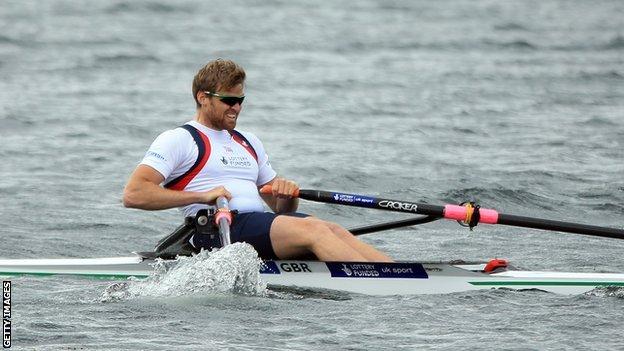 Coleraine rower Alan Campbell lost to Alexsandr Aleksandrov of Azerbaijan in the final of the Diamond Single Sculls at the Henley Royal Regatta on Sunday.

Campbell finished two lengths behind his opponent in the decider.

Richard and Peter Chambers lost their semi-final on Saturday, coming home three and a half lengths behind Bill Lucas and Matt Langridge.

The Coleraine trio were using the Henley event as preparation for next weekend's World Cup regatta in Lucerne.

Campbell progressed to the final of his event by beating American Jon Graves by two and a half lengths in his semi-final on Saturday, with Aleksandrov beating Slovenia's Luka Spik by two and three quarter lengths.

The Chambers brothers crossed the line three and a half lengths behind Lucas and Langridge.

The Northern Irish pair faced an uphill struggle against their British team-mates, a heavyweight crew.

Campbell had beaten Bulgarian Georgi Bozhilov in his Diamond Sculls quarter-final on Friday.

The Olympic bronze medalist had been seeded to meet Olympic champion Mahe Drysdale in Sunday's final, but the New Zealander was defeated by Aleksandrov at the last eight stage.