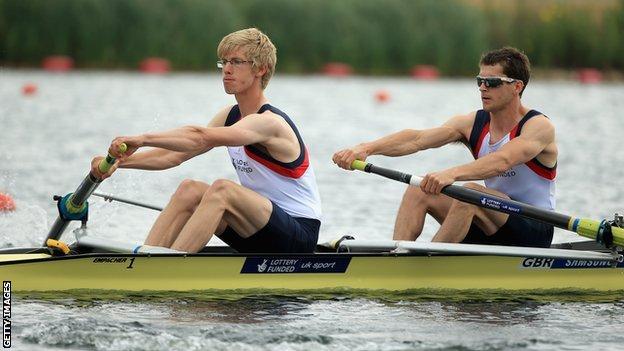 The pair finished strongly, moving past Spain and hosts Switzerland in the final 500m to claim victory in Lucerne.

Ten other British crews are through to their respective finals, which will take place on Sunday.

Seven progressed from repechages and semi-finals on Saturday to join the already qualified women's eight, pair and double scull.

Four of Britain's Olympic champions will feature on Sunday, with Helen Glover racing the women's pair with Polly Swann.

Andy Triggs Hodge, Peter Reed and Alex Gregory are all part of the men's eight, who were among those to win repechages on Saturday.

The men's sculls provides another four finalists for Britain, with crews from the quadruple, the double, the single and the lightweight double through.

Vicky Thornley narrowly missed out on a place in the final of the women's single scull, as did the second men's eight, the women's quadruple scull and the men's four.

There was also disappointment for Jamie Kirkwood, who finished fourth in the final of the lightweight men's single scull, while Ruth Walczak was fourth in the equivalent women's event.

The World Cup in Switzerland is the last major event before next month's World Championships in South Korea.