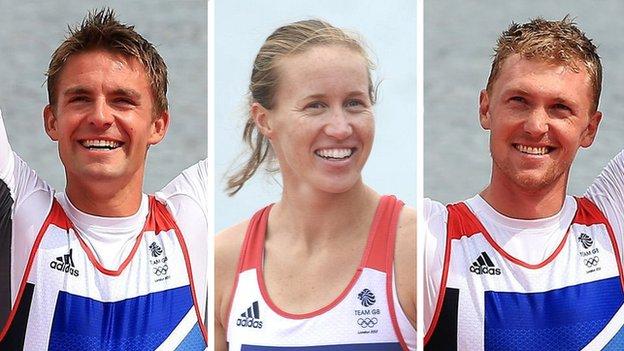 The world's best rowers will come together for the biggest regatta since the London 2012 Olympics when they compete in the World Championships at Chungju, South Korea.

GB at the World Championships

The 58-strong British team have a lot to live up to having won a record nine medals, including four golds, at Eton Dorney last summer.

And the last time the World Championships were held, in Slovenia in 2011 as 2012 was Olympic year, Britain topped the medal table with 12 medals, five of them gold.

Matching that haul in Korea may be a big ask considering several medallists have retired or are taking a break from the sport.

But that will provide an opportunity for Britain's rising stars to test themselves in major competition, with a record 73 nations taking part in the eight-day regatta.

Britain have entered a boat in all 14 Olympic classes alongside two Paralympic boats and three non-Olympic events.

The BBC Red Button and BBC Radio 5 live sports extra will have live coverage of the event, from 31 August to 1 September.

Here we pick out some of the highlights.

Going for gold: Helen Glover, who won gold at London 2012 with Heather Stanning, and Polly Swann have been unbeatable all season, winning gold at all three World Cups. A fourth success of the year in the World final (07:03 BST) should be a formality.

Who else should you look out for? Kathryn Twyman and Imogen Walsh have been going well in training so will hope to win a medal in the women's lightweight double (07:48 BST).

Going for gold: Britain's men's eight will target the nation's first World Championship gold medal if they make the final of what is considered to be the highlight of the regatta (08:33 BST). Jurgen Grobler's men are likely to face stiff competition from Olympic champions Germany as well as America.

Who else should you look out for? Chris Bartley won silver in the men's lightweight four in London but will hope to go one step better in Korea in the same event with three new crew-mates - Adam Freeman-Pask, William Fletcher and Jonathan Clegg - if they make the final (07:33 BST). The men's single (08:03 BST) and double (07:03 BST) and the women's double (07:18 BST) and eight (07:48 BST) should contest finals and perhaps challenge for medals. For Vicky Thornley, reaching the final (08:18 BST) in the single - her first season in the boat - will be considered a strong result in a competitive field.