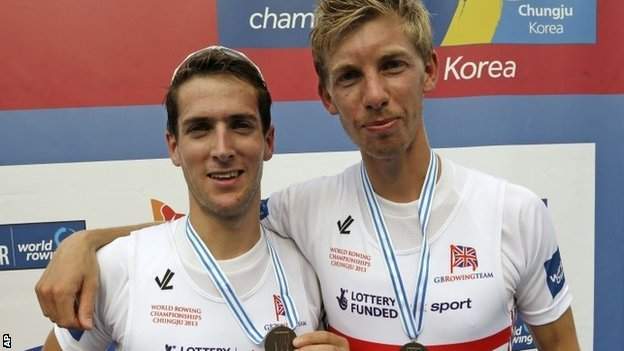 Sam Scrimgeour and Mark Aldred were third in the lightweight pairs final, while Ruth Walczak took bronze in the women's lightweight single scull.

Five British boats qualified for the Olympic class finals which take place over the weekend.

"It's the first time that I've made a World Championships final in a small boat so I'm really pleased," said Houghton who has won four world titles and two Olympic silvers in the quadruple scull.

Vicky Thornley, in the equivalent women's boat, and double scullers Matthew Langridge and Bill Lucas were fourth in their respective semi-finals and go into the 'B' finals.

Saturday's racing, which will be broadcast live on the BBC, features the first finals in the Olympic class boats with Helen Glover and Polly Swann going in the women's pair.

The two lightweight doubles - Imogen Walsh and Kathryn Twyman and brothers Richard and Peter Chambers - the men's four, and the men's quadruple scull are also all in action.