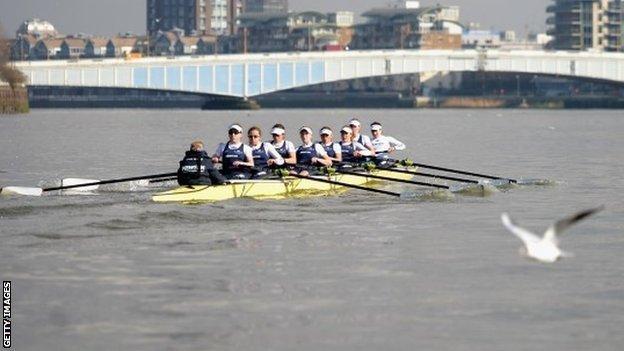 Oxford and Cambridge will renew their rivalry on Sunday when they compete in the final Women's Boat Race to take place at Henley-on-Thames.

From next year the event will be staged on the same course and day as the men's competition, which this year takes place on 6 April.

Oxford have won five of the last six women's races, including the 2013 race.

Cambridge cox Esther Momcliovic said: "When people talk about the Boat Race, we want them to think of both genders."

The first women's boat race took place in 1927 and has traditionally been held over 2,000m one week before the men's edition, on a different part of the River Thames.

And a cash injection from a new sponsorship deal for the Women's Boat Race meant rowers from both universities would no longer have to raise money themselves to pay for kit and training camps.

It also meant the two crews could have a proper set-up with full-time coaches. Following discussions between the universities, it was then agreed to hold both races on the same day and bring the event into the modern era.

As a result, from 2015, the women will go from racing a straight 2,000m course to negotiating the bends and tides of the Thames over 7,000m.

"The Tideway conditions are different," Oxford's Maxie Scheske told BBC Sport. "But we've been working on a three-year plan following the announcement and we will definitely be ready to race next year."

The organisers have replaced the old wooden plaque with a silver trophy for this year's winner, to match the men's silverware

"We are starting to see that and there's a general trend towards parity. I'm thrilled that our club gets to be an integral part of that."

For now, the crews are fully focused on Sunday's race at Henley, the 68th edition of the race where Oxford will be favourites following their success in recent years.

Oxford's Amber de Vere, who is competing in the event for the first time, said: "It's so exciting. I've been imagining the start for months now. All the training has been leading up to this weekend.

"Next year is definitely exciting and it has added something to training, but as a crew, we're only thinking about Sunday."

Cambridge's Catherine Foot added: "After training, I step back and think 'wow, I'm part of this incredible tradition'. There is nothing else I'd rather be doing than training for this event."

Highlights of the Women's Boat Race will be broadcast on BBC One on Sunday, 6 April at 16:30 BST, before the start of the men's Boat Race.