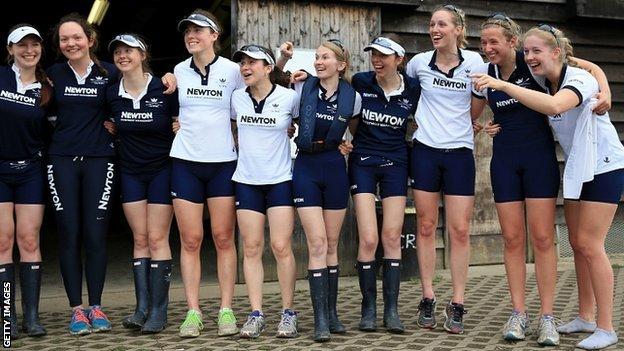 Oxford beat Cambridge for the sixth time in seven years to win the final Women's Boat Race at Henley-on-Thames.

The Dark Blues won the race, held over 2,000m on a straight course, by four lengths in five minutes and 50 seconds.

From 2015, the event will be staged on the same day and course, along the River Thames, as the men's competition, which this year takes place on 6 April.

The Women's Boat Race was first staged in 1927 and has been held at Henley-on-Thames since 1977.

And a cash injection from a new sponsorship deal for the Women's Boat Race meant rowers from both universities would no longer have to raise money themselves to pay for kit and training camps.

It also meant the two crews could have a proper set-up with full-time coaches. Following discussions between the universities, it was then agreed to hold both races on the same day.