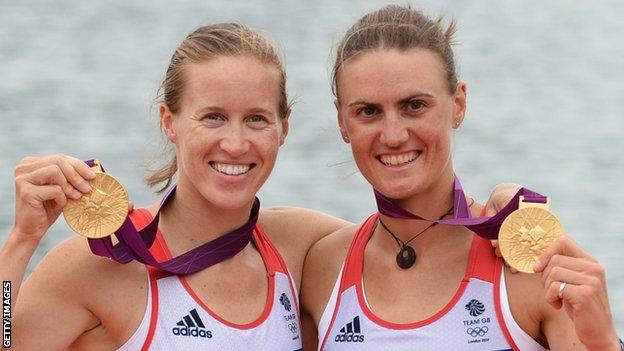 Heather Stanning's absence from the European Championships is "no drama", according to Great Britain's performance director Sir David Tanner.

Stanning returned to the army after winning Olympic gold with Helen Glover at London 2012 in the women's pair.

There's no hurry, our whole focus is on the Rio 2016 Olympics. It will take the time it takes.

She returned to rowing in November and won the trials with Glover last month but was withdrawn from the Europeans after showing signs of fatigue.

"It's just a precaution," Tanner told BBC Sport. "We'll get her back soon."

Last year, Stanning completed a six-month tour of Afghanistan, where as a battery operations officer, she focused on planning and managing the army's unmanned aircraft.

In her downtime, she would then do two sessions a day either on the rowing machines, spinning bikes or focused on general gym work.

"She trained hard enough, but it is not the same as being with the squad for a year," added Tanner.

Stanning then returned to rowing in November and came out on top in the tests for her stroke seat in the women's pair which saw her gain selection for the trials.

The 29-year-old went on to win the pair event at the trials, but eased off in the final part of the race as she struggled to hit the top intensity.

That pattern continued in training after the trials and the decision was taken to skip the regatta in Belgrade and scale back her programme.

"The performance and fitness gains were very steep when she returned," said chief coach Paul Thompson, who has paired Glover with Polly Swann for the European Championships. "She also put a lot of pressure on herself to be where she wants to be.

"You need to take little steps and she's trying to take big jumps. But most of the time we're holding people back so we can get the balance right so it's not a major thing.

"We have reduced the intensity and volume of her training and we will soon start to build it back up.

"If everything goes well, she should be back after Belgrade."

Two World Cup regattas in Aiguebelette, France (20-22 June) and Lucerne, Switzerland (11-13 July) follow the Europeans before the World Championships in Amsterdam in August.

Tanner added: "There's no hurry, our whole focus is on the Rio 2016 Olympics. It will take the time it takes."

Glover said: "We could have raced but why would you risk it when we have a quality athlete in Polly to stand in so Heather can take some more time?

"What has happened to Heather is not a headline, it's just something that happens to all rowers. For most, it happens during winter training. Unfortunately for Heather, it's happened before a championships."