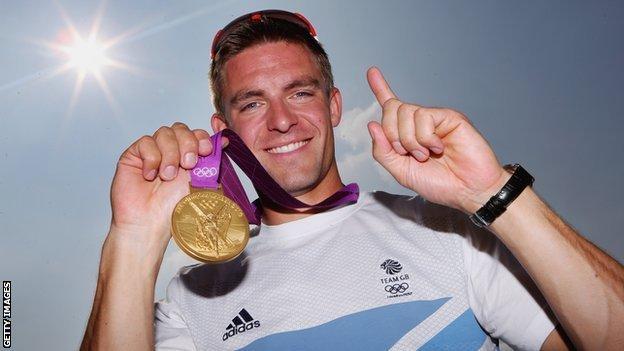 Double Olympic champion Pete Reed says he questioned his future in rowing when he found out he had dog allergies which were affecting his performance.

Reed, 32, who has lived with dogs for three years, struggled in winter training and could barely breathe as he crossed the line in April's GB trials.

His mum then suggested he could have a dog allergy, like his father developed at 32, and tests proved conclusive.

"It turns out I love rowing more than dogs," said Reed.

"And it turns out my wife loves me more than the dogs. We went through the process a couple of weeks ago of re-housing Maximus and Sky and we have cleaned our flat to get rid of all the dog hairs.

"We are going through a period of re-adjusting. That sounds silly, I am a naval officer and an athlete, I shouldn't be so concerned about dogs, but it breaks my heart to talk about them.

"The dogs are part of the family, they are the most loyal of friends."

Reed was off the pace for four months and as a result missed out on a place in Britain's top men's boat - the coxless four - for the European Championships, which start on 31 May.

The 32-year-old, who won both his Olympic gold medals in the coxless four in Beijing and London, will instead row in the men's eight in Belgrade.

The GB rowing team doctors carried out several tests, including some for glandular fever, but they all came back negative.

Reed added: "It was four months of hell. It was a really dark, tough time. If I did any high-end training then I would completely run out of power.

"Crossing the finish line in those races it was like trying to suck in as much air as I could through a biro tube. It was horrible and it was quite scary. So getting an answer was important."

When his mum mentioned his father's allergy, it began to dawn on Reed that his lungs would clear when on a training camp and he would perform, but when he came home, his chest would then tighten and the breathing difficulties returned.

"This is the lowest point of my career," said Reed. "[Head coach] Jurgen [Grobler] has put big faith in me [by selecting him for the eight] and is hoping this dog-free process will work itself out."