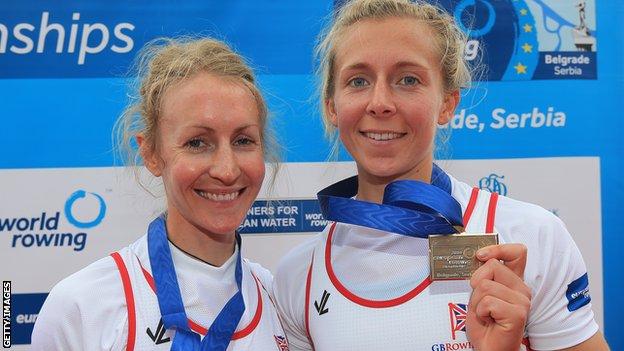 Olympic champion Kat Copeland believes a bronze medal at the European Championships suggests a bright future for her and crew-mate Imogen Walsh.

The pair teamed up for the double sculls in Serbia this month, the 23-year-old Teessider's first event since winning an Olympic gold at London 2012.

"The basics of our race are naturally really good and we're really up there with the top-end girls."

She continued: "The two crews that beat us in the final were gold and bronze medallists in the worlds last year which is our main focus for this year.

"We were all less than a second apart, that gives me a lot of confidence that as a combination we have some real strengths."

And with the World Championships in Amsterdam this August, upcoming World Cup events in Aiguebelette, France (20-22 June) and Lucerne, Switzerland (11-13 July) provide an ideal chance for them to further hone their partnership.

"Everyone enters a race and wants to win it, but the whole team has a long-term approach," she added.

"The Worlds this year is the main event - the be-all and end-all - but the World Cups are a chance to see where we are on the way.

"There are new combinations, people have been experimenting and it's a really strong team. It's really exciting to be a part of it."