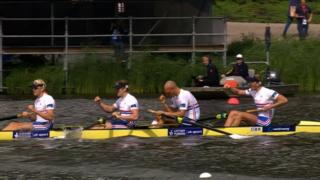 The British quartet of Alex Gregory, Andy Triggs Hodge, George Nash and Moe Sbihi win the final of the men's four at the World Rowing Championships in Amsterdam.

Great Britain won in a time of five minutes 40.24 seconds to finish ahead of the United States and Australia.

Triggs Hodge said "it was a real tough fight out there", but praised his team after they "dominated the field" in the second 1000m,