Heavy favourites Oxford beat Cambridge to win the historic first staging of the Women's Boat Race on the same course and same day as the men.

They finished six-and-a-half lengths ahead over the four-mile, 374-yard stretch from Putney Bridge to Chiswick Bridge in London on Saturday.

The Dark Blues were half a length up after the first minute and pulled away ruthlessly to finish 19 seconds clear.

Oxford also won the men's race for the sixth time in eight years.

In doing so, president Constantine Louloudis became just the 15th man to triumph for a fourth time.

But that achievement was eclipsed by the success of his female colleagues, who earned a seventh success in eight for Oxford in the 70th staging of the women's race. 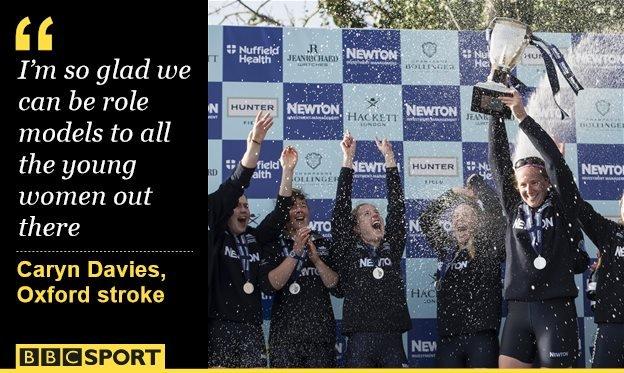 Each of those previous victories were on a straight 2000m course at Henley rather than over a greater distance on the gruelling Tideway stretch of the River Thames.

A prevailing wind against the tide added to the difficulty of the course, but Oxford were imperious as they finished in a time of 19 minutes 45 seconds.

"It's a really special moment, something I've been working towards for three years," Oxford president Anastasia Chitty told BBC Sport.

"It's even more special because so many women [have] not had this opportunity so its really humbling."

Oxford, coached by Christine Wilson, had to be rescued by a lifeboat last week after getting into difficulties while training in the choppy waters of the Thames.

But, having won the toss and chosen the Surrey bank of the river, the lighter of the two crews mastered the testing conditions to claim a 12th triumph this century.

It was their 29th victory in the 70 races since 1927 and added to the 40-second victory of Oxford's reserve boat on Friday.

"We didn't get off to our best start and Oxford did," Cambridge president Caroline Reid told BBC Sport. "We rallied well, though, and I'm proud of them.

"It was pretty horrendous around the halfway mark with the wind against the tide and some pretty high waves."

Those conditions should have favoured the heavier Cambridge crew in the 161st men's race, but Louloudis stroked favourites Oxford to their 11th success since 2000, all under the stewardship of coach Sean Bowden.

It was 23-year-old Louloudis' fourth win in five years, a run only disturbed by his absence in 2012 to focus on winning Olympic bronze for Great Britain in the men's eight. 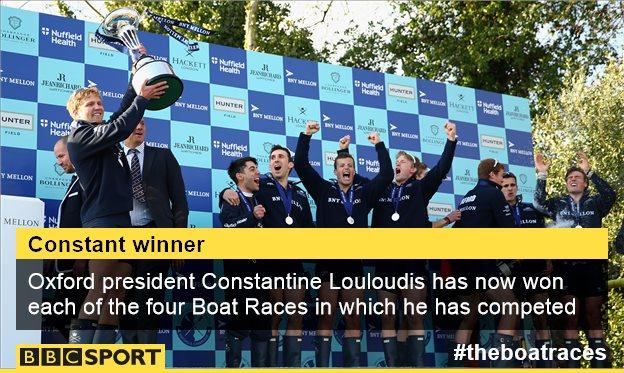 "Going in the fourth time having not lost, I felt much more pressure especially as I was leading the guys," Louloudis told BBC Sport.

"There were some pretty dark moments coming in but we dealt with it really well on the day. We stuck to our plan and executed a really good race."

Oxford, racing with a special motif on their kit in tribute to former coach Daniel Topolski, made their decisive move around the halfway mark and finished in 17 minutes 35 seconds to win by six lengths.

"It was 100% fair. It was very painful but they took us round the outside of Surrey and we couldn't respond," Cambridge president Alex Leichter told BBC Sport.

The victory completed a clean sweep for Oxford, whose reserve crew Isis won by three lengths from Goldie, the Cambridge second string.