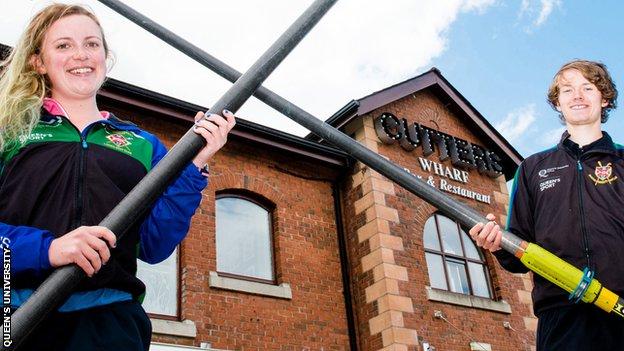 The rowers of Queen's University in Belfast admit they face a huge task against Trinity from Dublin in Saturday's annual races on the Lagan.

The QUB men's and women's teams are regarded as underdogs for what will be the 11th staging of the boat races.

"Trinity have a huge squad with people who have rowed for Ireland," said Alicia Green, the captain of the Queen's women's team.

"But there is no reason why we cannot give them a good fight."

Green, a second year student from Gloucestershire, took up rowing after an injury ended her involvement in triathlon.

Luke McCann, the men's captain for Queen's, said Trinity were the best rowing university in Ireland and would be hard to beat.

"Their senior eight came within a foot of winning the Irish Championships," said final-year student McCann.

"That was a big deal because the competition consists of clubs who have national squad members."

The women's race starts at 16:30 BST and the men's half an hour later, with the finish line at Cutters Wharf, Stranmillis.

Earlier, there are events for schools, juniors and freshers with the first heats starting at 10:00.