Britain's Helen Glover and Heather Stanning extended their unbeaten record to 28 races to retain their women's pair title at the World Championships.

The Olympic and European champions streaked clear of New Zealand and USA on Lake Aiguebelette in France to preserve a four-year unbeaten run.

In the men's event, Matt Langridge and James Foad repeated their 2014 silver.

Glover and Stanning - who won gold in a world record time in Amsterdam last summer - won by almost four seconds after a dominant display.

"We spoke about the 'just in case' scenarios and the pressure but it didn't come," Glover told BBC Sport. "We probably were a bit surprised that it was kind of won at the halfway mark.

"We've just won the World Championships in a way that feels like a training row in a sense."

In the lightweight double, Kat Copeland and Charlotte Taylor - who hold the European title - lost out to New Zealand in a high-calibre contest.

"I'm a bit overwhelmed," Taylor said. "We just knew we had to believe in ourselves and put everything on the line.

"Sport gives you emotions you never feel anywhere else and I'm a bit of a wreck right now." 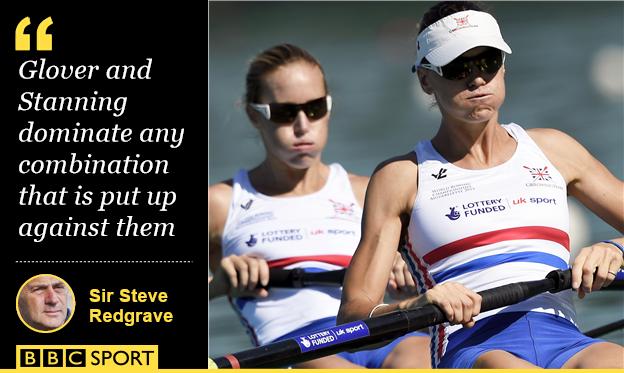 European Championships runners-up Richard Chambers and Will Fletcher were once again beaten by France in the lightweight double, but were encouraged by their performance against a crew who have dominated the event this season.

"We're a lot closer to the French than we have been but it's all about next year and hopefully the medal will be a different colour," said Fletcher.

The men's four of Scott Durant, Stewart Innes, Tom Ransley, Alan Sinclair were within 0.26 seconds of yet another silver medal, but the European champions lost out to a fading Australian quartet.

"It was great to get a medal but we were fractions off getting an even better one," Durant said.

Langridge and Foad - who took the European crown in Poland in May - were well beaten by reigning world and Olympic champions New Zealand.

"We thought we could challenge them but it wasn't our best row - we were racing for silver," Langridge said. "They are Olympic champions for a reason."

In the last final of the day, British men's quad of Pete Lambert, Sam Townsend, Charles Cousins and Graeme Thomas were unable to secure a sweep of medals after finishing fourth.

In good shape for Rio?

By reaching their respective finals, all six British boats had already qualified for the Olympics next summer.

The women's double of Katherine Grainger and Vicky Thornley have secured their place ahead of their final, while both the men's and women's eight know that they will be going to Rio as long as they do not finish last in Sunday's final two events.

The men's double, single and lightweight four must all avoid the same fate in their 'B' finals to ensure the British team fulfil their pre-championship target of earning qualification in 12 Olympic disciplines.

All four British Paralympic crews - the men's and women's single, mixed double and mixed coxed four - will also be in Brazil next year.