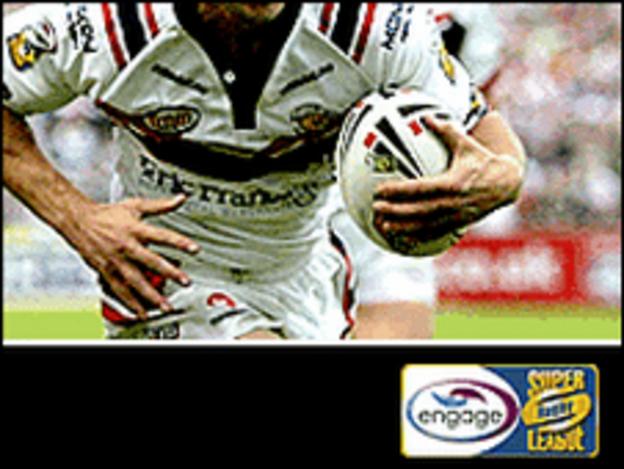 Crusaders came from behind at the Racecourse Ground to earn only their fourth Super League win of the season.

But two tries in five early second-half minutes by Michael Witt, the first converted by Clinton Schifcofske, and Vince Mellars turned it round.

Witt's drop goal put Crusaders in front at 11-10 before late tries for Ryan O'Hara and Rhys Hanbury wrapped it up.

In the battle of the bottom two, both of whom suffered a pre-season four-point deduction after going into administration, Crusaders' win takes them to within two points of Wakefield.

Having called the match a 'four-pointer', home coach Harris received a big boost begfore the game when big forward Hep Cahill, an influential presence since his arrival from Australia, was cleared to play despite his dismissal in last Saturday's the Challenge Cup defeat at Leeds.

But it was Wakefield who got off to a flyer, right wing Morton grabbing the opening try on nine minutes.

Thst came just seconds after stand-off Kieran Hyde had intercepted a pass on halfway but, with the line beckoning, tripped over his own feet and fell to the ground 20 yards from the line.

It turned into another of those disastrous Crusaders' starts when a kick to the right corner was mishandled by full-back Schifcofske for Morton to grab and go over again.

But the home side, despite some handling errors that gave possession away, clawed their way back into it.

And, just four minutes into the second half, Witt got his reward when Jordan Tansey dashed through the middle and put the stand-off away from 20 yards to score under the posts.

Schifcofske's goal cut the deficit to four points and Crusaders were level when centre Mellars scored an unconverted try in the left corner.

Wakefield nearly scored down the other end when Aaron Murphy had a try ruled out for a forward pass, while Hyde nearly went over under the posts only to be stopped by some last-gasp defence.

But Witt put the Crusaders in front for the first time on 68 minutes when he dropped a goal from 20 yards to get the crowd roaring. And tries from O'Hara and Hanbury, both converted by Schifcofske in the dying minutes, decided the contest.

"I though we were great from start to finish. Defensively, we were tough, physical and dominant. Even when we were 10-0 down, I thought we were going to put points on the board.

"All we needed to do was show a bit of patience but we were making 15 metres per set more than them throughout the game.

"It was only a matter of time before we got over the top of them but what I will say is that Wakefield showed fantastic resilience.

"I know there are a lot of young boys in there and they played exceptionally well, defending for their lives."

"I'm very annoyed. I am irritated by a number of factors but those factors I would rather keep to myself.

"When you get a weight of possession against you as we had, the momentum changes. I'm sure the score was a fair indication of the game. I'm positive of that.

"I'm very annoyed and it is not just the players who need to look at their own performance. The Crusaders thought they were hard done by last week, well they certainly haven't been hard done by this week, believe you and me.

"We picked up a load of injuries which affected us. We had two second-rows in the centre but that is not an excuse. All we want is a fair crack."