With one final last-gasp conversion, Gary Broadbent brought down the curtain on an 18-year career in rugby league under the south of France sunshine in Toulouse.

The simple kick between the posts at the end of Barrow's 42-28 success sealed a fitting farewell to the Vickerstown-based full-back, whose final two seasons were spent with his hometown club.

"I just remember the lads laughing and saying a few obscenities, so I stood back a couple of yards and thought - 'Shall I smash it or stroke it over? It went over so that was the end.

"I couldn't have thought of a better way to finish than in the south of France."

The sun-soaked Stade des Minimes was a far cry from the cold, wet winters that Broadbent endured as a young player at Widnes, who he joined aged 16.

"I first went to Widnes in 1993, and it was winter then, I don't like the cold, I'd rather play through the summer," Broadbent said. 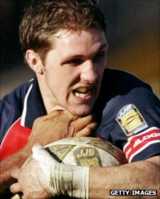 I'm not a gamebreaker, I'm just a dependable, 100% effort guy that does that week in, week out

"For me summer rugby is better all round, not just as players but for fans.

"You'll always have a debate as to which people prefer, maybe the older generation prefer winter rugby, but it is not for me."

Four years at Naughton Park then led to a move to Salford in 1997, and Super League rugby, where his career developed under the guidance of a string of coaches such as John Harvey, Steve McCormack and initially Andy Gregory.

"I owe a lot of gratitude, when I left Widnes to join Salford, to Andy," Broadbent said.

"Without him I wouldn't have played for Salford for seven years, so I owe a massive amount.

"He was a great bloke, would do anything for his players and we had a great team spirit and great atmosphere."

Spells at Whitehaven, where he reached both the Championship Grand Final and Northern Rail Cup showpiece events, and then Barrow followed.

And it was with the Raiders, whose Craven Park ground lies just across the Walney bridge from his home, that Broadbent tasted the first success of his career with the 2009 Grand Final victory against Halifax.

"You look back to 2009, Dave Clark was in charge, and we brought Steve Deakin, who I'd put up there alongside any of the best coaches I've played under," Broadbent said.

"When I look back to that team, we had Ned [Catic], Chris Young was like a raging bull, one of the best props starting or coming off the bench, Dave Allen was a big strong guy who could offload and Andy Bracek.

"That was the team of forwards we had, and then you put the gamebreakers we had like Jamie Rooney, Zeb Luisi and Liam Harrison, plus Andreas Bauer who got a couple of tries in the final, we just seemed to click."

BROADBENT ON THE BEST...

"Gary is one of the toughest, most professional players I have coached," McCormack said.

"I was fortunate to coach him at Salford, signed him up at Whitehaven and coached him at Barrow and during that period I can't remember Gary ever letting the team down.

"He ranks amongst the best players I have coached."

Despite a career spanning three decades, and 464 professional matches in rugby league, Broadbent remains humble about his achievements.

"I played a lot of games and was fortunate to not have a lot of injuries. I certainly wasn't a point-scoring machine, but I'm a big believer that you know your job and you go out and play to the best of your ability.