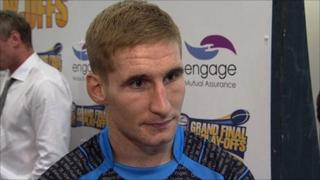 Tomkins ready for game to remember

Wigan Warriors full-back Sam Tomkins is hungry to win another Grand Final but is wary of fierce rival Saints.

The England international recently picked up the Rugby League Writers' Association player of the year award and was also "honoured" to be included in the Super League dream team.

Wigan coach Michael Maguire will return to his native Australia at the end of the season and Tomkins says it would be a fitting tribute to send him home with another Grand Final win under his belt.