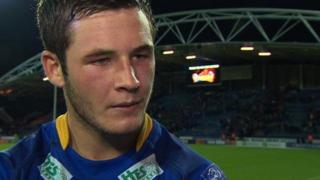 Leeds Rhinos' Zak Hardaker is delighted as his hat-trick helps secure a 34-28 victory over Huddersfield and a place in the last four of the play-offs.

Hardaker's hat-trick should have made the game comfortable for Leeds who led 34-12 with just 10 minutes left, but Huddersfield staged a late rally.

But Rhinos' Kevin Sinfield says his team are hitting top form at the right moment as they aim to become the first side to win a Grand Final after finishing fifth in Super League.