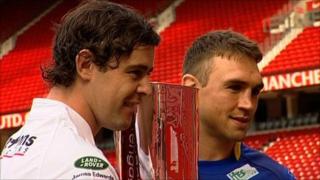 Leeds Rhinos and St Helens prepare to meet in the Super League Grand Final for the fourth time in the last five years.

The Rhinos have won the last three Grand Finals between these two sides and Saints will be looking to win for the first time since 2006, having lost four consecutive finals.

Leeds skipper Kevin Sinfield will set a new record when he captains his team in a Grand Final for the sixth time.