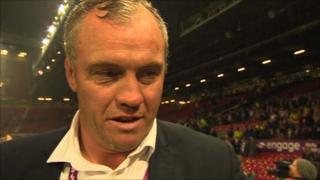 Leeds Rhinos coach Brian McDermott and captain Kevin Sinfield are delighted to prove their critics wrong with their 32-16 victory over St Helens at Old Trafford.

The Rhinos won the Grand Final despite finishing fifth in the regular Super League season.

McDermott says he is pleased for the players and glad the board stuck with them and him.