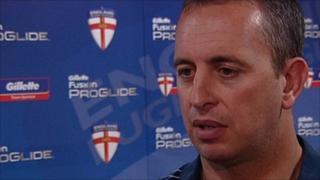 England coach Steve McNamara explains his selections for the Four Nations Series against Wales, Australia and New Zealand, which begins later this month.

McNamara reveals there is no place for injured scrum-half Rob Burrow who was man-of-the-match in Leeds Rhinos' 32-16 Grand Final win over St Helens, although seven of his team-mates have been included.

McNamara also says he has "no qualms" about including the 2011 Man of Steel, New Zealand-born Castleford stand-off Rangi Chase, in his squad for the tournament which begins on 28th October.