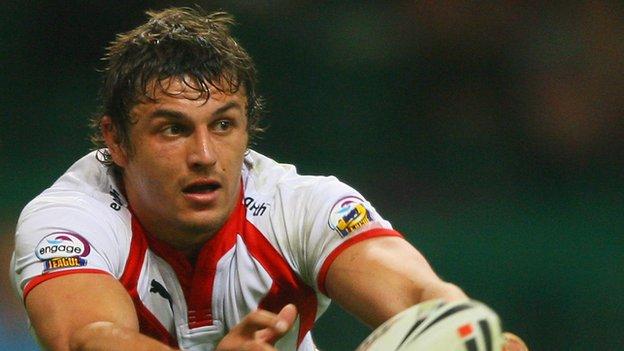 Rugby League's top players have followed the example set by other top sports in forming their own union.

St Helens' Jon Wilkin is the first chairman of the Super League Players' Association, while Warrington's Lee Briers and Leeds' Jamie Peacock are also on the management committee.

"I want to ensure the voice of every player is heard when decisions are made affecting our profession," said Wilkin.

"Whether it concerns playing rules, the disciplinary process or salary cap."

He added: "I am happy to lead the players of Super League forward as a collective group, something that has not been achieved before in this sport."

Leeds forward Peacock, the current England captain, said: "I have enjoyed great success on the pitch and formed great friendships off the pitch.

"I am grateful for the unique opportunities that rugby league has afforded me and, as I approach the end of my career, I want to ensure that those same opportunities are protected for this generation and future generations."

Warrington and Wales stand-off Briers added: "It is important that the players, regardless of the colour of their shirts, unite to ensure that their voices are heard."

In a sport where off-field problems can occasionally flare up, Wilkin also suggested that the newly-formed association can also provide a counselling service, as well as representing players in wage negotiations and contract talks.

"From my point of view," he said, "it started in 2006 when we were on tour with Great Britain.

"A few things happened on that tour and I didn't know where to turn or who was best protecting my interests.

"I couldn't really approach my club or the RFL. I had no one to turn to. That was where the thinking started for me. I wanted an organisation that represented me and had my best interests at heart."

The association hope to gain official recognition from the Rugby Football League, whose board are due to discuss the issue.

"We'd like to be recognised by the RFL," said chief executive Ernie Benbow. "We have approached them and are waiting for an answer as we speak."

Meanwhile, the RFL have confirmed that they are to base their World Cup 2013 operations team in Manchester, close to BBC Sport's new headquarters at MediaCityUK.