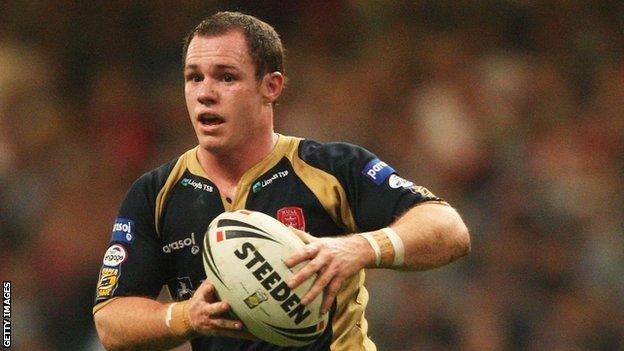 Injury-hit Catalan Dragons have signed former Hull KR hooker Ben Fisher on loan from Championship side Batley for the first two months of the season.

"After injuries to Eloi and Greg, we needed an experienced hooker to partner Ian," said coach Trent Robinson.

"Batley were understanding and very helpful in the process."

He added: "I value Ben's ethic and know he will settle quickly into our system."

Hooker Pelissier faces an eight-week lay-off after breaking his jaw in last Saturday's friendly against London Broncos, while loose forward Mounis suffered cartilage damage and is out for a month.

In addition, Frédéric Vaccari is now sidelined for several months after tearing his cruciate ligament against the Broncos, while fellow winger Cyril Stacul suffered a broken ankle.

The Australian-born Scotland international, who made 124 Super League appearances in five seasons for Hull KR, joined Championship club Batley after being released by Rovers at the end of last season.

But, even before he has made his competitive debut for Batley, Builldogs coach John Kear has allowed him a temporary return to Super League.

Fisher, who was due to arrive in Perpignan this Sunday, turns 31 the day before a likely debut in the Dragons' Super League opener against Bradford next Sunday (5 February).