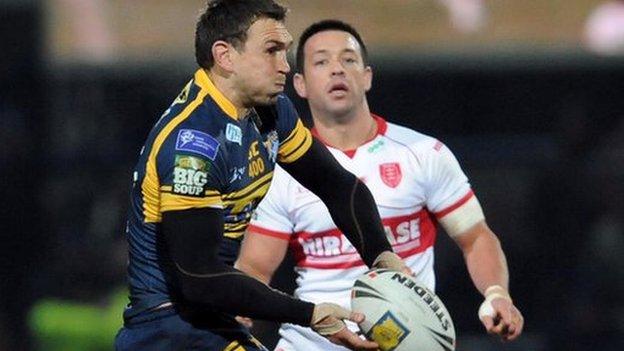 Leeds began the defence of their Super League title by running in six tries to overpower Hull KR 34-16 at Headingley.

Graeme Horne's second try cut the gap to two at the break and slack defence from Leeds saw Kris Welham touch down.

But Leeds showed their class with a hat-trick of tries from Kallum Watkins, which were all converted by Sinfield.

Second rower Brett Delaney had the distinction of scoring the first try of Super League XVII on five minutes, catching the Rovers defence napping with a quickly-taken tap penalty to stretch out for the line.

But, after two tries for debutant Horne, one of six new faces in the Rovers' line-up, the champions looked in danger of only their third opening-day defeat of the Super League era when Welham took advantage of weak marking to collect debut boy Shannon McDonnell's pass and score a third try for the visitors.

We had some defensive lapses but, other than that, it was good

Acting captain Michael Dobson was off target for the third time with the conversion attempt and, for a time, Sinfield's kicking accuracy looked like being the difference between the sides.

But 20-year-old Watkins also made a crucial impact, scoring his first try after being sent clear by Danny McGuire's pass.

He then took Carl Ablett's pass to race away for his second try and, although Welham sent Rovers winger David Hodgson over for a try on his debut, Watkins forced his way over from close range to complete his hat-trick.

McGuire jinked through a tiring defence for the final try, Sinfield kicking his fifth goal as he homes in on 3,000 points for the club.

But the final 18-point margin of defeat was tough on Rovers, who defied the absence of last year's player of the year Blake Green and newly-appointed captain Ben Galea to give the champions a stern opening test.

"We had to fight for it. Hull KR came with a lot of resilience. They didn't go away. I thought their intensity would drop off but it didn't.

"We had some defensive lapses but, other than that, it was good.

"What I wanted as a coach we got out of it. I would have liked us to play a bit better but give Hull KR some credit for that."

"I'm pretty proud of my boys, considering the penalty count and the fact we spent the whole game defending our own line.

"For the first 65 minutes I thought we were outstanding and, if a couple of things had gone our way, I might be a bit happier.

"But they didn't and Leeds are a first-class side. You lack concentration or miss a tackle and they hurt you. That's why they are the champions. The scoreline probably doesn't indicate the effort we put in because it was six tries to four."