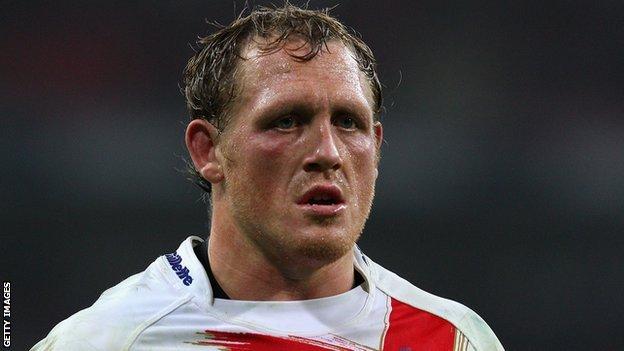 England international Ben Westwood missed a last-minute conversion for Warrington as they drew with Hull FC.

Rhys Williams touched down for Wolves and Hull's Danny Tickle and Simon Grix swapped converted tries as the visitors led 16-10 at half-time.

Tom Briscoe and Tickle crossed to give Hull the lead but Rhys Evans scored late on with Westwood missing his kick.

Peter Gentle was taking charge of his first game as Hull coach and they took just three minutes to open the scoring, Yeaman finishing off a sweeping move out wide.

However, the lead did not last long, Aussie forward Waterhouse scoring the simplest of tries after Wade McKinnon spilled the ball behind his own try line.

Hull were architects of their own downfall when they allowed Warrington to make easy yards, Grix bursting through to feed Williams, who touched down in the corner.

Tickle's try looked set to send in Hull level at the break, but Joe Westerman knocked the ball on from the restart and Grix took advanatge to cross the whitewash.

But that did not dent the hosts' confidence and they scored two tries in 10 minutes after the break, Briscoe and Tickle both crossing to give them the lead, which they held until two minutes from the end.

Warrington kept pushing for a leveller and eventually it came when Hull failed to wrap up Grix in the tackle and his off-load started a move out wide which put Evans in.

However, it could have been even worse for Hull, had Westwood's conversion not spiralled wide.

"The effort was there from the players, but I'm disappointed in the result. We did enough to win.

"It was a point lost for us. We shot ourselves in the foot too many times and put too much pressure on our defence.

"They knocked the wind out of our sails but the boys bounced back and we had to work pretty hard for our tries.

"I've got confidence that this side has potential. The players took a step towards that today because Warrington are a very good side."

"There were some really disappointing things about the game. We shouldn't have been behind.

"I don't like touch judges calling no try and then they get awarded as tries. We've just come back from Australia and they have video referees at every game. We have them at two games a weekend.

"We either have to do something about it or just embrace it. The biggest difference between here and Australia is the inconsistency of our rulings."