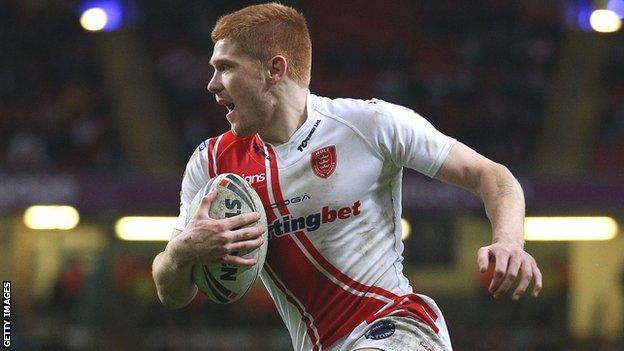 Hull Kingston Rovers centre Kris Welham has signed a three-year contract extension to keep him at Craven Park until the end of the 2015 season.

The 24-year-old was the second highest try-scorer in Super League last season with 26 from 27 appearances.

He just missed out on England selection for the Four Nations and his progress brought offers from other clubs.

"A few clubs threw numbers at me but I said as long as Hull KR wanted me, I'd stay," he told BBC Radio Humberside.

"This is the place I want to be. I grew up here and still live here.

"I think it's every boy's dream to play for their hometown club and I'm lucky enough to do it and they've offered me a new deal so I'm going to take it.

"The only reason I would go, if I ever did go, would be because the club don't want me."

However, with interest from other clubs mounting, Rovers acted quickly to retain his services.

New Robins head coach Craig Sandercock said he was delighted that Welham had committed his future to the club.

"I believe that Kris will play for his country. And I believe we haven't seen the best of Kris and that'll happen in the next few years and we're going to have the benefits of that here," Sandercock said.

"It's a massive boost for the club because it's Kris giving us his stamp of approval on where we want to go. It is an absolute delight having him here because as well as [being] a good player he's a quality person and those attributes are very valuable for our football club."